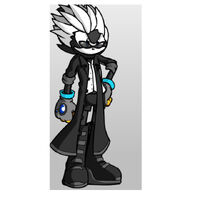 ""One more go Grandpa!!!""
—-- Leon trying to achieve Sword's Grace by battling his grandfather
""Hey wat- (Leon notices how close he is to the girl's chest and blushes) S-s-sorry"
—-- Leon to any girl

Leon is a black hedgehog with a hint of orangeish-yellow in his spikes. He's 5'7 and usually wears black clothing, sorta like Kirito, to help him blend in with the background. He wears a black jacket with white trims and a white tiger face on the back over his suit to protect his suit from getting dirty. He wears white gloves and has two dagger sheathes on the side where his dagger/pistols are held. His sword is in a black sheathe on his back which he uses more than his daggers. He has a scar on his left eye from the fight against The Shadow and he hides the scar because it reminds him of how powerless he was to stop The Shadow from taking his sister.

He wears the black glasses that his shadow self had and uses them to activate his Angel personality. He retains his usual clothing except he replaces his jacket with a long trench coat.

Leon changes his attire completely. He wears a black bandana with a white tiger face on it and he keeps his glasses from LL2. He wears a white undershirt and has a black ascot over his shirt which resembles that of a prince's. Leon wears straight cut white pants that say 'The Crimson Room' and he adds a short sword called, Igor onto his back.

Leon changes his glasses from black to white and switches his shirt to that of Yu's from the P4 anime. He keeps his pants from LL3 except, this time they're red with black lettering. He wears a leather jacket that says 'Prince' and includes a sheath for his sword. He gave one of his dagger pistols to a local kid when he was being targeted by a shadow so he only has one dagger pistol by this point. Leon wears a black glove on his left hand and a white glove on his right and they have Angel Crystals (Gabriel and Lavos) embedded into the palms that boosts his attack and defense, respectively. He also wears his pants from LL3.

Leon's attire goes back to what he wore in LL1 with the added bonus of him having a sheath in his pants for his sword, Gabriel which is now in Eternal Form. His jacket also says 'Leon +' The name is scratched out because the person who's name is after the plus is the person you marry. Leon wears black army boots with, you guessed it, Crystals that boost his attack speed.

Leon is in one word, a gentleman. He hates fighting women becuase, his sister beat him multiple times at the mansion where he was raised. Leon will always ask a person how they're feeling whether they're villians or heroes. He takes care of his suit and if it gets dirty, he goes on a rampage. Leon can be described as a anti-hero because his only goal is to get back his sister so, he won't help anyone and tries to not make friends with anyone. Leon can also be naive when it comes to food and despite being glutoonous, he's skinny.

Leon keeps his gentleman type attitude but, he accepts his last harboredd feelings, which is that he won't be good enough to be a leader of the army. After accepting his feelings Leon gains a leadership kind of outlook and looks out for his friends more closely and even flinches in pain when they're attacked.

Leon was born at Angelo Mansion in the outerpart of Mobius. His parents died at a young age(his father died while overseas when he was 7 and his mother died at childbirth). He was raised alongside his twin sister, Grace at their grandfather's estate and was tought the old ways of the Angelo family. When he was 14, Leon felt an odd presense at the estate so when he investigated, he saw a dark figure standing over the body of Grace. The figure noticed him and disappeared, taking his sister's body with it. This really hurt Leon because, his sister was his protector so after the incident, Leon begged Grandfather Angelo to help him improve and by the time of his 17th birthday, he was taught Sword's Grace. Once he turned 17th though, he left the mansion in search of the figure.

Leon can feel presenses before he knows they're there and he uses that power to find the mysterious being. Leon also can cast illusions onto his opponent (a power that came to him after learning Sword's Grace) making them see things that aren't there and will generally use the power to get away. Leon's final power is the power to make doubles of himself (a power he learned to develope from his Grandfather). After absorbing his shadow self, Leon gains his Dark Half's ability of creating shadow copies of himself that aid in battle but, it also drains his light energy.

Leon can see well in the dark and will generally go to a dark place to train. When he activates his speed, he's almost unstoppable but, he hasn't learned how to use the speed on its own, since it's generally used when he uses Sword's Grace. After absorbing SL, Leon gains the ability to blend into the shadows around him and also use the shadows to increase his sword's range.

Leon, coming from a rich household, is a natural on the piano and whenever he sees a piano, he feels compelled to play. Leon is also adapt at swordplay and learned from his great-grandfather Maximillion the secret family technique, Sword's Grace, in which he fuses speed with his sword to cut anything as if dancing. He learned to dance from his sister, Grace before she disappeared on his 14th birthday.

Leon, like every boy, has a weakness to girls with big breasts and will not fight any girl with a huge buxon. Leon also can't stand spicy food and eating spicy food causes his abilities to falter, while sweets boost his abilities. He won't generally fight girls but, if he mistakes one for a boy, he'll fight them. After gaining his Dark half, Leon gains a slight weakness to Light energy which damages his body internally each time it's used.

Leon carries around two daggers on his pants with his sword strapped to his back. He's generally a range fighter but, when he sees someone in trouble, he pulls out his sword and helps. He only uses his dagger pistols when he feels like toying with an enemy. When in his Angel Forms, he gains a shining white sword called Gabriel. Leon then switches his weapons from having 2 dagger pistols to having one dagger gun and one longsword, which he calls Igor

Shadow Leon is a shadow version of Leon created by Dr.Natas and is a manifestation of Leon's harbored feelings. Shadow Leon is in every way Leon, except for his attitude, which is like that of an arrogant prince.Shadow Leon is also the last boss in the game, Lion's Requiem: Feelings Untold

This version of Leon is the ring master of the entire series and it's his fault for the events that unfolded. The version retains both aspects of SL and Regular Leon, and even Prince Leon has his own version of Gabriel called Diablo and uses it in the final battle

The Angelic Warriors are a group of beings that have the power of God's angels and are tasked with defending the Earth from the Demonic Warriors and Leon is the leader of the group.

This super form causes his hair to turn from black to total white and he gains the power of flight, but he can only activate this form when he uses his Angel Crystal. The max time he can use the form is 15 minutes.

This happened when the crystal broke and fused it self with Leon, allowing him to uses light as his weapon and he grows 2 angelic wings from his back. He gains a sword that only appears when he's in this form called Gabriel, which greatly increases his power. The form only lasts 5 minutes max and he can switch it on and off.

This form is only seen in the game The Lion's Light: Darkness Within. It happens during the final boss fight and Leon's angel form makes an avatar of light that has 7 wings and a shining halo around it. The weapon that forms is that of a book and the book allows him to attack the Shadow's final form, since he's full mortal.

This form is a black and white hedgehog with one angel wing and one demon wing. He/She, depending on who started the fusion uses Gabriel, Leon's sword and Grace's bow nunchuck, Belthazor. It can use both of their powers and it's only weakness is it's conflicting personalities, which is because both Leon and Grace are controlling the being from within.

"Forgive me, sister I have failed you." - F Rank

"The lion takes flight" Leon, in a 2 player match

"You were no match" Leon, after winning in a 2 player match

"One step closer to you, sis." Leon, after beating a boss

"Foooorgive me, sis" Leon, after losing a 2 player match

"I'm just here to find my sister, i'm no hero in a cape nor am i a villian so please take in consideration my feelings, Player." Leon, being selected for campaing the first time

Leon and Grace are based on the YinYang with Leon being the Yang, despite his name, which refrences the Tiger part of the duo

His full name is Leon D'Angelo de Rosa meaning, "Lion from the Angels of Roses"

His outfit is based on Kirito's from Sword Art Online

His theme is Pursuing my True Self, The Persona 4 Game Opening

Leon's longsword is a reference to the Velvet Room Man, Igor, whom you meet at the beginning and the sword's length plays on how long Igor's nose is in the game.

Retrieved from "https://sonicfanon.fandom.com/wiki/Leon_the_Hedgehog?oldid=1799954"
Community content is available under CC-BY-SA unless otherwise noted.