Start a Wiki
This is an article about Leo the Tiger, a character created by Spyken (Emidikun on DeviantArt) on December 22, 2012. 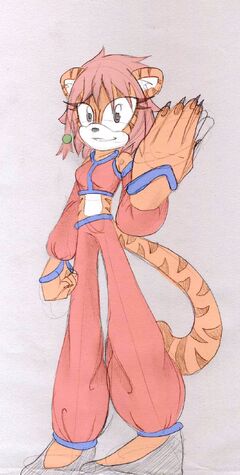 Leo is a character from a different time period, who somehow stranded in Spikes' future.

Leo is a slender tiger with pale red hair (which used to be vivid red), colorless eyes and orange fur.

She wears a short sleaveless red and blue top, a red "baggy" pants (which attaches at the feet) with a blue belt, red and blue sleeves and black and green slippers. She also wears blue fingerless gloves, only shaped like a V. One long strand of hair is held together on the right side of her face by a green "thingy"

Under her top, she wears bandages, to cover her breasts.

Her irises turn orange when using her powers and her whole eyes glow when berserk.

She wears a short sleaveless red and blue top, a red "baggy" pants (which attaches at the feet) with a blue belt, red and blue sleeves and black and green slippers. She also wears blue fingerless gloves, only shaped like a V. One long strand of hair is held together on the right side of her face by a green "thingy"

Under her top, she wears bandages, to cover her breasts, which she looses after her gender is found out.

Her irises turn orange when using her powers and her whole eyes glow when berserk.

10 years later, she changed her hairstyle and has two long braided strands of hair on the sides of her face, with the lower part dyed black. Her outfit consists of an short open red vest with bandages underneath, long red sleeves, a red waistcape over a white baggy pants held together by a blue sash and "boot" versions of her slippers. She wears long, pantyhosed, fingerless gloves under her sleeves, who still keep the V design.

Leo is really reserved, not opening up to someone other than Spikes. She does care alot for her friends, but the memories of her past keep her from attaching herself. She can get into a violent rage sometimes, which can be litterely lethal to her surrondings.

Before the incident she was a eversmiling prince and was loved by everyone.

After many struggles with the team and Spikes' efforts, Leo became more approchable and even started to chat with the rest.

Leo hails from the kingdom of Trialtar, set in another dimension. It was a prosperous kingdom and life there was good. The king was benevolent and they were in a time of peace. The king had one problem however, he could not have a child. How many times he and his queen tried, it never worked. Over time this began to frustrate the king to a point of deep depression, even preventing him of eating.

This all changed on the day that the queen was announced pregnant. Everyone assumed the child was a boy, as it had always been that way, but to the queen's surprise it was a girl.

Fearing her husband would fall into depression again, she presented her husband another baby when he came to visit her. He named his "son" Leonidas. Leo was raised as a prince and her mother prevented any chance of her father finding her gender out (like never letting Leo swim).

Over time they entered a state of war and all but the main city was conquered. To deliver his people, the king and his knights went to investigate the site of Atlantis, a city that had completely dissapeared but was rumored to have been invincible.

They came back with an golden casket full of glowing "beans" and stored it in the royal bank. A text on the casket said: for each one of these, you will get power, but beware, as each power comes with a price. When you have nothing more to lose, He will come after you. The king ignored the warning and ate several beans. He felt that he became stronger. What he didn't know is that each bean that he consumed made a subject dissappear and gave him his strength.

With the king's new powers, the kingdom was freed easily. But the king didn't have enough, he kept feeding on them and the decrease of people became drastic, to the point there was almost no one left and He came; the Time Reaper.

Suddenly, the king understood what happened to Atlantis; their king had made the same mistake as him. Hearing a noise in his father's room, Leo rushed to aid him and found him and the entity. Leo trew his sword at it, but the sword just disappeared, shocking Leo. The Time Reaper then charged at Leo, but the king jumped in the middle, revealing some immunity to him. He then said that it was all his fault, that Trialtar would fall, but that he, his son, had to live. Before Leo could answer, he gave him all his powers and was wiped out of existence together with the whole kingdom. Leo instinctivily made a protective bubble of energy. Leo remained like this for an unknown period.

When Spikes wanted to go challenge Sonic in the past again, the machine failed when he was travelling, leaving him in the timeless zone. While there, he saw an orange bubble of energy, with a tiger inside.

Suddenly something charged at him, but went away when the bubble extended on him. Spikes thanked the tiger and asked his name. The tiger told his name was Leo and that the thing that wanted to attack him was the Time Reaper, an entity with the sole mission of deleting everything that shouldn't exist. Leo also explained that couldn't see them within this bubble. After all those explanations, Spikes introduced himself too and told Leo the reason why he was there.

Meanwhile, Max managed to get the time machine to work again and proceded to retrieve Spikes (due to him having a time bracelet). Spikes felt that he was being dragged back and told an hesitating Leo to come back with him. But Spikes dragged Leo with him anyway.

This was the start of a new life for Leo.

"Beans": Ancient artifacts of legend, these were said to give whoever used them great power and a long life. The price paid for this is high though, as it erases any person you’re close with (or your entire kingdom if you’re a king) from existence. Their life energy is then transferred to you. The number of beans adapts itself to every person. When the last bean is consumed, you will have lost all your loved ones. But that is not the worst.

If you finished all of the beans, it was a confirmation of your greed and the guardian will come retrieve you. It is named the Time Reaper, as it takes away your time by taking you to the timeless zone until your death.

The beans have costed the fall of many empires and kingdoms, a prime example being the lost city of Atlantis and if it weren’t for her father's love toward her, Leo would’ve disappeared too.

Berserk state: Due to not being the one who ate the beans, Leo can't control her powers sometimes. This causes her to become a mindless beast only set on destruction. She is near unstoppable in this state, requiring emotional strategy.

Containment collar: To prevent herself from going berserk again, Leo asked Max to develop a device to contain her power. It is not perfect though.

1 of 14
Add photo
Retrieved from "https://sonicfanon.fandom.com/wiki/Leo_the_Tiger?oldid=1855187"
Community content is available under CC-BY-SA unless otherwise noted.