The author of Lena Fischer considers this page to be unfinished. As such, some sections may change.

Lena Fischer is a female lynx and a Freedom Fighter.

Lena is a brown furred lynx with dark brown spots covering her body, and cream colored markings. Her eyes are yellow with one lash on each eye, and she wears teal eye-shadow. Lena has a fairly short muzzle and sharp teeth. She has medium sized ears, and black tufts of fur on top of her ears. Like any lynx, she has a short tail. Her long bangs cover her left eye. Lena's body type is very similar to Bunnie's.

Like how Antoine represents many French stereotypes, Lena displays many German stereotypes. Lena is straightforward and undiplomatic. She is also believed to not have a sense of humor, though this is untrue. Lena is a very punctual individual. It is very rare to see her late for an event. Lena has a love for order and organization. She is never the one to disobey rules. Many people see Lena as cold, stoic and serious. However, this is not necessarily true. Another thing to note is Lena's love for alcohol, another German stereotype. It is easy to get her wasted, as long as there is enough alcohol around.

Lena was born in a country ruled by a dictator. As a child, she witnessed the horrors that her fellow citizens had to endure. When Lena was 11 years old, her family finally decided to escape the country. Miraculously, they made it out alive. Lena's family soon headed to a neighboring country, where it was much safer. However, Lena did not enjoy her time there. So when she turned 17, she left for the continent of Northamer. There, she discovered a quaint little village called Knothole. She decided to settle down there. Soon afterwards, Lena discovered the Freedom Fighters. After hearing about their cause, Lena decided to assist them in the fight against Dr. Robotnik. Lena has lived in Knothole for 3 years now.

Lena is a nocturnal animal, so see can naturally see well in the dark. She is also able to defend herself with her claws and teeth. She can hiss to threaten others.

Lena is particularly skilled with the bow and arrow. Lena has been using a bow since she was 9 years old. She is a trained professional at archery. She is also a trained geneticist; while living in Eurish, she took interest in genetics, and studied genes.

Lena does not have any magical powers, so this can come off as a disadvantage. She also has the health of a normal, non magical Mobian.

Lena and Jim share great chemistry with each other.

Referenced from a picture of Bunnie.

A drawing by Starry that I colored. Credit goes to the original artist!! 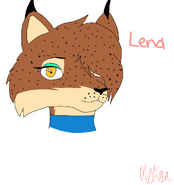 Lena in her bikini, enjoying a nice drink. 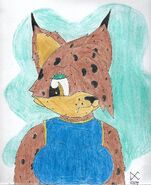 Lena drawn by BrownbearEduardo. Link - https://brownbearedurardo.deviantart.com/art/Request-Serious-Lynx-730151021
Add a photo to this gallery
Retrieved from "https://sonicfanon.fandom.com/wiki/Lena_Fischer?oldid=1871218"
Community content is available under CC-BY-SA unless otherwise noted.