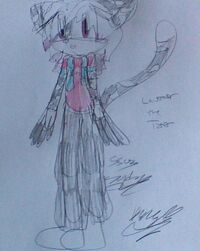 Lavender is a black tiger with white stripes. She has a white furry muzzle, and the top of her hair is white, and the relativley short bottom is white, but going down in lavender, and some of it has violet highlights. Lavender wears a light blue t-shirt and wears gray cargo pants along with white tennis shoes. She also wears a magenta vest.

Lavender can be quite brutally honest, but caring towards her closest friends. Lavender can be rude and bitter at first, warming up to people as time goes along. She is also very compassionate about her friends, doing whatever she needs to to help them, and hoping they would do the same. She will always tell someone if they are doing something outraegously good, or considerate. She often shuts people out of her life. She is not afraid to say anything.

Lavender was raised by her mother and father with her sister, Anne. She was constantly put in into play productions and paegants, often winning, but this turned her bitter and to shut others out. She was an actress up until the point of when she was in college, where she would perform nightly, even having a boyfriend at that point. She grew to love acting, but one night a wolf "fan" came up and bit her, which happened to be a werewolf, which is where she gained her wereform. She was extremely scared and knew what she was capable of becoming, which caused her to transform into a tough and brutally honest person, losing all of her current friends at that time and even her boyfriend, who turned out to be using her to become a more popular actor.

Lavender after that quit acting.

Replace this text with some info about the character's powers, if they have any. If they have a lot, you can list them, but if you just do a list, make sure that the list items link to pages about the powers!

Replace this text with some info about the character's abilities, if they have any. If they have a lot, you can list them, but if you just do a list, make sure that the list items link to pages about the abilities!

Lavender is very close to Sam, she trusts him greatly, and thinks of him as her greatest friend. She respects him a lot, and thinks he is very mature, and very considerate and kind. She has even saved Sam's life on a couple occasions, one where Macabee the Echidna beat him, and she nursed him back to health.

Retrieved from "https://sonicfanon.fandom.com/wiki/Lavender_the_Tiger?oldid=1799952"
Community content is available under CC-BY-SA unless otherwise noted.