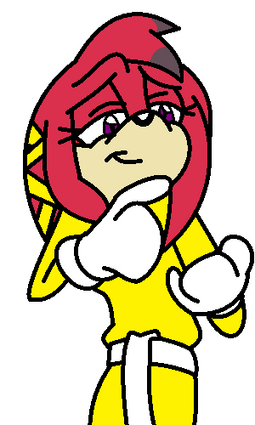 Lara-Le is a mobian echidna with red fur that has a pinkish tint and brown fur on the tips of her bangs, peach skin on her muzzle and purple eyes. She wears a yellow robe tied with a white belt, white gloves with one finger separating from the mitt, yellow bands crisscrossing on her dreadlocks behind the foremost left and right dreadlocks. She also wears brown sandals.

Lara-Le is very dedicated to her people and has a love for her children. She has a very spiritual nature and is a bit of feminist, refusing to let herself become any form of a housewife. While not violent, Lara-Le is very well-educated and is willing to oppose evil.

Lara-Le was born and raised in Echidnaoplis. She met and fell in love with Locke, the current guardian of her time, while they were both young. They quickly got married and Lara then became pregnent with Knuckles. During this time, the Knuckles Clan reached out to the brotherhood, in need of a guardian to protect Angel Island. Locke, unbeknowist to Lara, would perform genetic experiments on himself and Knuckles' egg to create a powerful guardian. Afterwards, Knuckles' egg would be given the last elder of the Knuckles Clan.

Lara-Le soon had another child with Locke, a girl. As Locke began to raise Jenna-Le in traditional guardian fashion, his decisions ruined their relationship and Lara and Locke divorced.

Retrieved from "https://sonicfanon.fandom.com/wiki/Lara-Le_the_Echidna_(Marshalia13%27s_Universe)?oldid=1800529"
Community content is available under CC-BY-SA unless otherwise noted.