Lapis is the main protagonist of the game Elemental Crystal: Bejeweled Being Lapis. He has the power to use special Compounds to his will and is from a race of people who, like him, are themed after jewels.

Lapis, unlike others of his kind, has a very dull gem. He used to be self-conscience about this, but after realizing that he could use Compounds (magical substances that give him elemental powers), he no longer worried. He helps his home, the Gem District, by keeping the terrible (yet unorthidox) Jasper.

Much like some official Sonic Team games, Lapis's game has its own plot, setting, and characters, yet still takes place in the same universe as Erica Sakura and company. 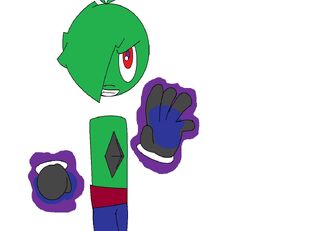 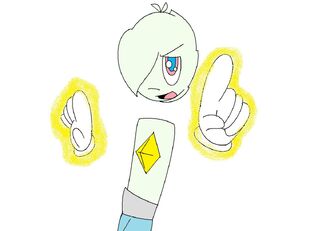 Ultimate Lapis.
Add a photo to this gallery

Lapis is voiced by Motoko Kumai in Japanese and Vanessa Marshall in English. Here are some things he'd say.:

"Onyx, have you ever felt...weird...about your jewel?"

Retrieved from "https://sonicfanon.fandom.com/wiki/Lapis?oldid=1575657"
Community content is available under CC-BY-SA unless otherwise noted.