Start a Wiki
This is an article about Lance the Wolf, a character created by LordWeirdo on 04/8/2016. 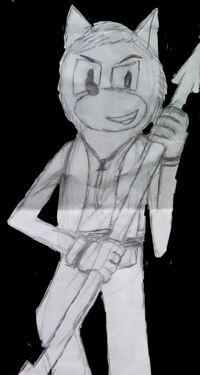 LordWeirdo, the author of Lance the Wolf, considers this page to be unfinished. As such, some sections may change.

Not to be confused with Lance the Rabbit, Cat, or Power Hedgehog.

"You see potential? Get some glasses! I'm no warrior, I'm an almost-funny comedian!"
—Lance, to the spirit of Doom the Hedgehog[Author]

Lance the Wolf is a Sonic the Hedgehog fan character created and owned by LordWeirdo. He is the primary protagonist of the upcoming That's Not Funny fanfiction series.

Lance is a maroon Mobian wolf of average height and somewhat slender build. He has maroon fur, longer on top, with a white muzzle and underside. He always wears white gloves with black wristbands, as well as brown shoes and a necklace with a dull knife attached. In addition, he usually wears dark blue jeans and a silver "Fluent in Sarcasm" t-shirt.

During the events of That's Not Funny: The Unimaginatively Subtitled Adventures of Lance the Wolf, he began wearing Doom's clothes—a green vestlike garment (see picture for clarification) with a black leather belt—under his shirt. He removes the shirt when fighting.

Lance is extremely easygoing and annoyingly cheerful. He finds almost everything funny, and can and will make a joke out of anything. He is also outgoing and has a rather magnetic personality (though most who are drawn to him are soon repelled by his overdeveloped sense of humor). Despite his constant wisecracks, he is easily able to grasp the seriousness of a situation...most people just can't tell.

LordWeirdo was quickly growing bored of his first Sonic fanon characters, so he decided to make another one. Thus, Lance was born, and his predecessors are forgotten.

Lance's name was something random that popped into the creator's head, and it was perfect because it was also a weapon pun. The species was slightly less random, as the wolf is LordWeirdo's favorite animal. As much as anything is his favorite.

His occupation, and thus his personality, were two of the first facets of his character to be developed. Weirdo had originally thought of the new character being a singer, but that was too common. However, he continued in the entertainer idea and made Lance a comedian, allowing him to also give Lance the imperturbably cheerful and jocular personality he had once had himself.

The outfit came from absolutely nowhere. Or, to be more specific, the depths of Weirdo's mind, which is essentially the same thing.

For whatever dumb reason, this section is told the way Lance would tell it.

Once upon a time there lived a dumb college student named Lance. One day he got lost on campus (a frequent occurrence) and was suddenly possessed by the ghost of an ancient wizard named Doom (not a frequent occurrence). He was bored, so he let Doom talk him into going on a dangerous quest to exact revenge on Doom's killer.

Naturally, this quest took them into the deepest and wildest parts of the Iron Mountains--because that's the way these things happen in stories. Fortunately, an epic-looking echidna with personality issues overheard Lance and Doom arguing and volunteered to guide them. He would become Lance's "sidekick" (which was fortunate because he was quite a bit more competent than Lance).

With Stalemate's help, Lance and Doom reached the secret(ish) factory of their enemy's employer. After a lame battle, the bad guy won and Doom lost his control over both Lance and his own powers. So Lance found himself hiding in a closet in the factory, where he overheard the bad guy's boss talk about his dreams of ruling the world. (Becuase every bad guy does that for some reason.) He also overheard Nox being killed.

Lance realized how great a threat Dr. Hamberger was to the safety of the world (duh) and wished he had a way to stop him. After all, it wasn't like he could just generate a bunch of glowing weapons like had had when Doom was fighting Nox, right? While he was thinking about this, however, he accidentally sent a beam of energy at the ceiling, dumping a thousand tiny pieces of rock on top of Stalemate and himself. Realizing that when Nox had taken Doom's power, he had given it (deliberately or accidentally) to Lance, Lance went out and blew up Hamberger's factory.

As the host of Doom, Lance is capable of generating unlimited, destructive energy. However, it cannot be projected unless focused into a shape, i.e. a dart. Though he was slow at first, thanks to practice Lance can generate and focus his Doom Energy at an approximate rate of a cubic inch per second. Excepting Lance himself, only enchanted objects and persons are immune to this energy.

As a wolf, Lance has excellent stamina and does not tire easily. In addition, partly due to his profession as a comedian, he has developed quick reflexes to dodge flying tomatoes and such. (He can also fall asleep whenever he wants to, but he has yet to find a use for that.)

"Does the ability to make a joke out of anything count?"
No.
"Shoot."

Lance has many weaknesses, but likely his greatest one is his inability to think and do anything besides walk or eat simulaneously. In order to think, he must drop whatever he's doing and stand there, vulnerable to attack. Even then, he is a poor tactician; most of his success stems from pure luck.

He is also not particularly strong or fast. While his reflexes make up for some of his lack of speed, he often relies on Stalemate for force. He may also just blow it up with Doom Energy...that works too.

Lance does not use any physical weapons with any kind of regularity. He does, however, generate weapons using his Doom Energy. His weapon of choice is a double-headed spear (inspired by his name, naturally), but he also uses darts and throwing hammers. As they are made of energy, the entire point of hammers is lost, but he doesn't care.

During the brief battle with Nox Nekros in TNF 1, Doom took over complete control of Lance's body, causing the latter to become Doom Lance. In this form, Lance's fur, eyes, and clothing become various shades of green, and radiate Doom Energy. This form gave Lance enhanced strength and speed.

As Doom was permanently weakened at the end of the battle, it is probable that Lance cannot undergo this transformation again.

Retrieved from "https://sonicfanon.fandom.com/wiki/Lance_the_Wolf?oldid=1800668"
Community content is available under CC-BY-SA unless otherwise noted.