Start a Wiki
This is an article about Lance the Rabbit, a character created by Spyken (Emidikun on DeviantArt) on October 3, 2012. 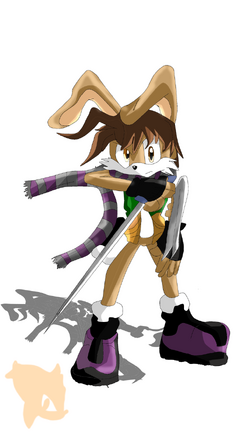 Lance is a ninja rabbit from the future, who was shunned by his clan for the loss of the green Chaos Emerald (which they called the Midori).

Lance is a light brown rabbit with dark brown hair and eyes.

He wears a green/beige sleaveless vest, a striped violet/purple scarf and deep purple/black shoes. He has two long portruding bangs.

Ten years later, his hair grew, reaching his shoulders in the back and obscuring more of his face in front. His two bangs also grew and fall down.

Lance has a rather cold personality, rarely opening up or even talking to anyone. He seems to only care about himself or a litle bit about his sister to the very least. He is, however, a very gentle guy who cares a bit too much of other's view of him, having grown up trying to be accepted.

He has a great sense of honor and will not fight unarmed individuals. He also refuses to fight those he deems not worthy.

After spending more time with the rest of the group, Lance softened, to the point of smiling sometimes.

Lance is the first child of Dahlia the Rabbit and Jim the Hare . His parents’ love was forbidden by his grandfather and as such he was sent away with his father.

After growing up alone with his father for 5 years, Lance was allowed to return to the clan because of his grandfather’s health. Because his grandfather’s only child was his mother, Lance was to be the next head of the clan. When Lance arrived there, he learned he had a sister named Liu. Lance trained very hard for years to make his grandfather accept him. Unfortunately, this seemed impossible to do.

When he was fifteen, Lance was to be crowned next head of the clan. The ceremony consisted of taming the clan’s katana, the Takai Jixyanpaa sword, and slash his initials on the wall of heads. Lance proved worthy of the blade and succeeded. But they were attacked a few minutes later, by Eggman Nega .

The clan proved too powerful for Nega’s machines and the victory seemed achieved. But then they saw that Nega had taken Dahlia hostage. He said he would kill her if they didn’t give him the Emerald. Lance was told by his clan to act like a true leader. The boy hesitated long and ended giving the Emerald to the man. In response Nega said he would let his mother live, but that she would be his slave and fled. The entire clan was enraged at Lance for his choice, as it had not given any good results.

The next day Lance fled.

When the clan learned of this, they declared him a ronin and erased his initials. Witnessing this, his sister Liu went to search after him and told him the news. He said he didn’t care and wanted to continue but she showed him something she took from home; the Takai Jixyanpaa sword. She said that she believed in her brother and that he still could get his honor back. Liu’s words touched him very much, although he didn’t show it. When Thomas (Max) Pirlingham sent an announcement about making a difference by joining him in fighting against evil, they were the first to respond. He got an obsession of being their best asset.

Two years passed and during this time Eggman Nega attacked en masse. Every plan of his was stopped by the Peace Enforcers. On a attack in a big city, Spikes the Hedgehog reappeared and saved the day. This caused Lance to see him as a rival. After robot-cleaning the town, Spikes was attacked in his back, only to be "saved" by Keith the Echidna. Spikes commented that he was slow, with Keith replying that he doesn't have superspeed. This was the rebirth of Team Atom, Max' former team.

When not saving the world of Nega, they search for their lost ones.

Above average strength: While his strength is nothing compared to Keith's or Kojack's, Lance has demonstrated being stronger than the average Mobian, examples being the multiple times he has carried Kyxen around without fatigue.

Martial artist: Having trained for years on it, he became a master in his clan's fighting style. This fighting style relies much on kicks and swift movement. In situations where he didn't have his sword, Lance still showed being totally capable of handling himself in battle.

Great agility: Having been trained in a ninja clan, Lance is very agile, allowing stealth movements and attacks.

High reflexes: Lance has also disciplined himself in sharpening his reflexes, making him hard to surprise. A sign of his heightened reflexes is that he was able to evade Spikes' Unlimited Fist.

Expert swordsman: As the next head of the clan he had to master the clan's katana. He thus trained years to make this possible. He is possibly one of the greatest living swordsmen on the planet.

Confidence: This has been a weakness more than once, Lance's lack of confidence (or the other way around sometimes) have made him prone to lose his concentration.

Takai Jixyanpaa sword: The clan's katana, it was forged using the power of the Midori. It slashes trough almost everything, only having failed on Spikes' powered shoes.

1 of 9
Add photo
Retrieved from "https://sonicfanon.fandom.com/wiki/Lance_the_Rabbit?oldid=1854991"
Community content is available under CC-BY-SA unless otherwise noted.