Lady Corona is an anthropomorphic moth who is mostly known for her biomechanical body structure. She is a member of the Fatal Four in the Sonic and the Steel of Darkness series. As an expert pyrotechnician, she is in charge of handling the infantry and weapon arsenals of the group. She is also the only female within the team.

Corona is half-moth, half-robotic. Her head is red and she is pale in color. She is about 75% mechanical, as a result from her conditions. Her eyes are mechanical, using magnifying lenses in its place. She has 2 mechanical antennae with actual blinking lights, which are controlled from her nervous system. Her exoskeletal arms can be stretched in limited range, and her legs are semi-bionic. She wore a brown winters jacket, and some long boots. Due to the removal of organic wings, it was replaced with a propeller and a rocket-powered jetpack.

She is flirtatious but smart. Although, she is mostly geeky in nature. She is also testy, easily to be irritated from anyone, despite being patient. She adores with her looks, and she applied beauty to her own designs. She seems to suffer a case of nyctophobia (fear of darkness) in the slightest. She also dislikes to be alone from others, including her own teammates.

Lady Celosia Corona can be a dangerous opponent. She is pretty good as a battle tactician, and can do a considerate amount of damage, if not taken seriously. Her choice of weapons are her incendiary explosives that can ignite an area in any range. Despite her heavy firepower, she has a tendency to be self-destructive to herself. Due to her nature, outsmarting her is the best option in dealing with this kind of foe. 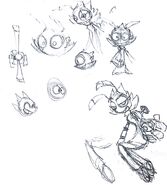 Sketches of her original design 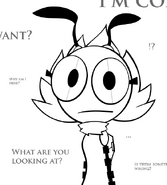 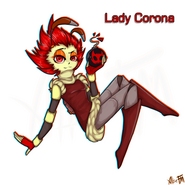 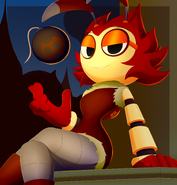 SlickeHedge
Add a photo to this gallery

Retrieved from "https://sonicfanon.fandom.com/wiki/Lady_Corona?oldid=1853077"
Community content is available under CC-BY-SA unless otherwise noted.