Start a Wiki
This is an article about Kyxen the Lynx, a character created by Spyken (Emidikun on DeviantArt) on November 7, 2012. 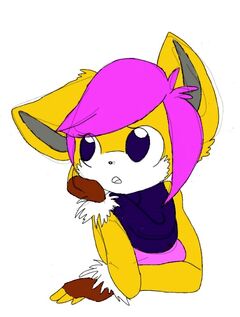 Kyxen is the older sister of L3, a fashionista from the future obsessed with current trends and hot guys. She has an intense attraction to Lance the Rabbit.

Ten years later she let her hair grow out, which now also constantly covers one of her eyes. She usually wears her now very long hair in a bun while outside or in two ponytails when staying indoors, with two side bangs.

Kyxen takes being girly to the extreme, almost only talking about boys and nice outfits. She can be seen reading fashion magazines most of the time. She regularly just says what she is thinking, like her countless love declarations towards Lance.

She can however be very responsible when needed, as she practically raised her siblings. It is revealed that her overly girly behavior is her trying to compensate having needed to act as a surrogate mother to her younger siblings from a young age.

Despite her behavior, she doesn't mind going on missions (which usually include fighting and sometimes getting dirty), but actually enjoys them. Also, being used to being a "mother", she is the one usually doing the housework in the HQ. Everyone also loves her cooking.

Kyxen was born the oldest child of two loving parents and was the only child for quite some time, causing her to be spoiled to some extent. When she was six, she got three younger siblings at once and while she was a bit dissapointed with not being the center of attention in the house anymore, she still doted on them.

Over time, this "lack" of attention pushed her to seek it somewhere else, causing her to partake in multiple extracurricular activities and working her way to becoming one of the most popular girls at her school.

One day disaster struck and their parents died in a car accident. The triplets took this less hard than Kyxen because of their age, while she was utterly devastated.

The siblings were able to continue living in their house due to an unknown family member sending them money, but Kyxen had to take a more motherly approach towards the triplets, which caused a permanent shift in their interactions. To cope with her loss, Kyxen took refuge in her girly behavior and went to do various jobs to fund this lifestyle, which also made her see her siblings less often.

On a rare day when the siblings were together out in the park, a meteor impacted near them. While Kyxen went out to get help, she told the triplets to stay where they were. Fijo was too curious however and went off to see as soon as she left. Wanting to keep him out of trouble, Eleim went after him followed by Nathris (who didn't want to stay alone).

Arriving at the crater, the siblings were startled with the still intact, glowing meteorite. Still curious, Fijo went closer to it. His two siblings tried to stop him, but instead the three of them tripped and fell headfirst against the meteorite. When Kyxen came back with others, she was unnerved to not find the triplets where she had left them. When they heard an explosion a bit further ahead, she panicked and ran as fast as she could to that location. She was horrified when she saw her siblings lying unconscious inside an seemingly empty crater. The three of them were immediately hospitalized.

When the three of them woke up, they were greeted with immense joy by their sister, who had spent all the time by their bedsides. After that she tearingly scolded them for not listening to her and scaring her that way. When everything had calmed down, she quietly asked them if they felt any different than before. The triplet didn't understand the question, but Kyxen told them it didn't matter. Not long afterwards, the doctor came in and expressed his relief in their recovery. What they thought had been a single night was actually two days of sleep. After saying this, the doctor also asked them if they felt any different.

Noticing two people already asked the same question, Eleim asked them what the problem was. The doctor told them to look in the mirror. When they did, they were shocked to find that their eyes and hair had changed in color and shape. Their brown hair and eyes had turned into blue eyes and blue/yellow hair for Eleim, red eyes and red/orange hair for Fijo and green eyes and light green/dark green for Nathris.

Shortly afterwards, they discovered that they had elemental powers. Eleim could control lightning, Fijo had control over fire and Nathris gained control over plants/nature. All three of them also gained the power of flight, but only when together. The three of them quickly became their town's resident superheroes under the name L3, protecting it against crimes and supervillains.

While she was at first mostly proud and concerned about her siblings' new occupation, Kyxen's previous feelings of self-worth returned. This was not helped by the fact that more and more people started to recognise her as "the big sister of L3" instead of just herself. At first, she just acted out by dying her hair gradient pink purple (which was also followed by her friends), but as their fame continued to grow, she went to new lengths...

Kyxen would regularly vent about her predicament with the guy at the counter of the town's prison when she was accompanying her siblings there (which considering her sibling's occupation, was often). That guy understood her, because he actually had a doctorate in robotics but couldn't find a job, so he was stuck with this one. Kyxen really enjoyed being able to talk about her troubles and being understood, and treasured those moments.

Wanting to also gain some recognition, Kyxen loaded her already busy schedule with charity events, cutting in her free time and even became a volunteer firefighter. But even then she was still compared to her younger siblings.

One day while trying to save people from a burning building, she became trapped herself. As she and the people with her started to lose consciousness, they were rescued by the timely arrival of Fijo, who diverted the flames and Nathris, who made a ramp to escape. Once again L3 was praised, with not even a word of her attempt at saving the people. Following this event, Kyxen left the firefighters.

After this experience, Kyxen couldn't help but feel useless compared to her siblings. One day while she was talking with the counter guy at the prison, he asked her if she would feel better if she had powers herself. While the idea had never crossed her mind before, she now considered that it would probably be the case. However she said it wasn't likely to happen unless another mysterious meteorite came crashing down, which both of them laughingly agreed on. But the more they talked about it, the more she began yearning for powers of her own.

On yet another one of her trips to the prison, she found him laughing while reading the newspaper. When she asked wat the funny thing was, he showed her an ad in the newspaper, where a certain professor was looking for volunteers to participate in his peculiar experiment. The goal was apparently enchancing the natural limits of the body to be able to do things no normal person could do. He then laughingly asked since when they allowed science-fiction in ads. While Kyxen laughed too, part of her was still intrigued by the peculiar ad, which she secretly took home with her. Out of curiosity, she contacted the professor on the e-mail adress from the ad.

The man responded quickly and wrote that he was extremely happy for her interest in the experiment. In his e-mail he also detailed the specifics of the experiment, how it could be the start of a new era and so on. Not completely convinced, Kyxen asked him for proof of his work. He responded with a video log with two other men who were doing all sort of exercises. Near the end they were able to run at amazing speeds and punch right through a punching bag. He then added that he wasn't scamming because he didn't want even a penny from her. When she asked him why he needed volunteers if his study was already effective, he responded that he needed to see the reaction of different individuals to perfect the formula.

Two years after the creation of the Peace Enforcers, Eggman Nega revealed himself. Every plan of his was stopped by the Peace Enforcers, having become sworn enemies. On a attack in a big city, Spikes the Hedgehog reappeared and saved the day. After robot-cleaning the town, Spikes was attacked in his back, only to be "saved" by Keith the Echidna. Spikes commented that he was slow, with Keith replying that he doesn't have superspeed. This was the rebirth of Team Atom, Max' old team.

Peak agility: Being a gymnast since the age of six, Kyxen is very agile and souple. She can bend her body in very difficult positions, which helped her escape captivity many times.

High stamina: Kyxen went to the gym with her friends every week, she did almost everything there, but really enjoyed the running. She also enjoyed swimming.

She jogs three days per week and regularly uses the pool at HQ.

Moderate strength: Also by going to the gym. Although is wasn't her main occupation, Kyxen also regularly did the regular workouts and some lifting. She has beaten everyone except Keith, Kojack, Lance and Leo at armwrestling (Lance refused however). She definately is stronger than she looks.

Biometal: In the experiment she was in, Kyxen was injected with a liquified metal, modified to respond towards neural impulses and enchance the capabilities of the body. If the experiment was completed, she would have been capable of shapeshifting, metal creation, semi-invulnerabilty and enchanced strength. However she would also have lost all of her emotions in the process, becoming more alike to a machine. Since the experiment was halted and the substance only affected her arms, she still got to be herself, but still managed to get some abilities:

1 of 28
Add photo
Retrieved from "https://sonicfanon.fandom.com/wiki/Kyxen_the_Lynx?oldid=1862484"
Community content is available under CC-BY-SA unless otherwise noted.