"We need make the team." - Kudana the Cat

She loved interested to Hangku the Hedgehog. Also she likes sticking her friends.

She is good powers by using the fire like Blaze the Cat. Also she uses the ice powers to freeze the waters.

"I AM driving faster!!" - She said to Hangku when is turning the corner with Nissan Maxima 2016 while is escaping the robots of Dr. Eggman

"Hangku, do like love me?" - She saids lovely to Hangku and he accepted

"Let's fight together!" - She fights with Hangku

"Wow Hangku, your weapons is futuristic!" - When she suprised and happy

Hangku The Hedgehog: She has feelings for Hangku which she is to shy to reveal to him.

Major skills: When she run out of the magazine for AK-47, she shoots with Colt M1911 until reloads.

Healing to the wounded friendly, using camoflage mode and sniping to the enemy without discovered when she used AWP with silencer.

When enemy spoted at you, she get discovered. She is vulnerable to forest in dark, then she hits an enemy bullet by RPK. She feels wounded and unconscious, same as Hangku the Hedgehog. 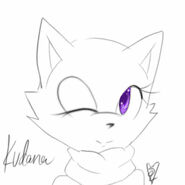 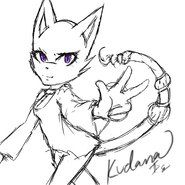 Add a photo to this gallery
Retrieved from "https://sonicfanon.fandom.com/wiki/Kudana_The_Cat?oldid=1830552"
Community content is available under CC-BY-SA unless otherwise noted.