"Engarde grandfather!"
—Krinkinkoy before sparring with his grandfather

Krininkoy is a baby eagle and is Krinkinko's adopted son. He is the oldest of Krinkinoy's children and can only glide so far.

Krinkinkoy was the youngest eaglet when he was born and he was greedy too. He ate everyone else's food in his nest. He then was disowned by his parents and was kicked out of his nest and put up for adoption. Then Krinkinko adopted him. He lives aspiring to be like his missing father with his sister, Krinketta and his grandfather, The Elder of Frog Village. He wishes to join GUN at age 5.

Krinkinkoy is a young child who is determined to be like his father and thus trains each day with his grandfather. Krinkinkoy is one of the only people (the other being his grandfather) who can take the brunt of his Krinketta's onslaughts and temporarily subdue her. He is shown to be very polite in contrast with his little sister.

Relationship with other Characters

Smash The Echidna-Idolizes him due to the simple fact that his father did.

Princess Falalala-Stu the Echidna-Loves him aunti "Stu" due to all the gifts and food she provides his family out of pity. 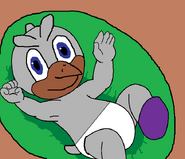 Krinkinkoy as a baby
Community content is available under CC-BY-SA unless otherwise noted.
Advertisement