Koya Zephra is an 9 month old anthropomorphic bakeneko and 1% angel. He is Fuchsia's younger brother (often mistaken to be her child) and Hikari's youngest son. Because he cannot talk yet, he often communicates through body language or telepathy. He can read the minds of others and sense auras, despite his age.

Koya dosent have much history, because he is still just a baby, except that he was born eight months prior to Fuchsia's twelveth birthday, and he was 2 months early. He is the often mistaken to be Fuchsia's child, this makes her very angry. It is often pointed out (mostly by Rouge) that Fuchsia is not very good at taking care of him.

For unknown reasons, Koya has learned how to read other peoples thoughts, sense auras, and communicate telepathically. This is first noticed in Sonic Angels when he was jealous of Dia getting all of the attention. He also can sense chaos emeralds from miles away. Like all babies, he needs his mother or his sisters' help. He isnt very good at walking yet, but he can climb and open doors. He also can easily escape from cribs, playpens, car seats and highchairs.

All of the weaknesses that comes with being a baby.

Koya is very sweet, kind, and playful; and he loves attention. However, he is very demanding, he seems to always want affection. When he dosent get the attention he wants, he will start crying until someone pays attention to him. Like the average house cat, he is startled and distracted very easily. He has a very short attention span, and cannot stop himself from chasing small objects. Despite being just a baby, he appears to show remarkable intelegence.

If your character can be considered an enemy/rival, please state why.

Koya sketch, wearing a bib and sucking on a pacifier 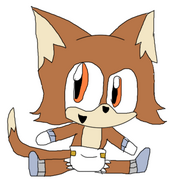 Koya's favorite toy
Add a photo to this gallery
Retrieved from "https://sonicfanon.fandom.com/wiki/Koya_Zephra?oldid=1313882"
Community content is available under CC-BY-SA unless otherwise noted.