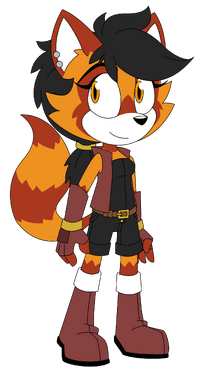 Korvetama the Raccoon (pronounced "KORE-və-TAH-mə") is a soldier that serves the Fire Clan of Fiamme.

An averagely-built raccoon who stands a bit over three feet tall, Korvetama has a short muzzle with a triangular nose, medium-sized, pointed ears that stand upright, and a medium-length, bushy tail.

Her fur is primarily carrot orange in color, with a white muzzle, chest, and stomach, while her forearms, legs below the knee, neck, ears, facial markings, and tail stripes are Chinese red in color. Her relatively long hair, which is tied back in a loose ponytail and also sits between her ears on top of her head, is black in color, and her eyes are chrome yellow in color.

Korvetama's attire typically consists of a black vest over a brandy tube top, elbow-length, brandy-colored fingerless gloves with black trim and metallic gold bands across the wrist, black shorts, and brandy boots with white cuffs, as well as two silver studs in her right ear.

Like the other Fire Clan soldiers, Korvetama is a fairly well-rounded fighter, who primarily excels in close-range combat; she primarily wields a glaive, a type of polearm that allows her to keep a reasonable distance away from her enemy, but also carries a lightweight dagger as her backup weapon.

Korvetama is a fairly adept Pyromancer as well, and primarily wields low to mid-tier melee techniques of the Fire element, with her ranged/energy-based options being a bit weaker.

Korvetama is relatively resistant to the Elements of Fire and Nature (her Fire resistance is somewhat higher, however). She is also quite agile, able to dodge slow-moving opponents and attacks with ease. Hot, dry weather strengthens her pyromancy to some degree.

Korvetama is weak to the Elements of Ice, Earth and Water. Her defenses aren't anything special, therefore she mostly relies on her agility to try and evade potentially devastating attacks. Cold and/or rainy weather also severely dampens her pyromancy.

Her name is the Estonian word for "scorch".

Inked version of current design
Add a photo to this gallery
Retrieved from "https://sonicfanon.fandom.com/wiki/Korvetama_the_Raccoon?oldid=1860623"
Community content is available under CC-BY-SA unless otherwise noted.