Knuckles the Echidna is a red anthropomorphic Echidna who is also from the Canon Series. He lives on Angel Island and spends most of his days guarding the Master Emerald.

Rouge the Bat (To an extent)

Shadow the Hedgehog (To an extent)

Chao
Dislikes
When the Sun is too bright

Being tricked or taken advantage of

Anyone who is after the Master Emerald

Rouge (To an extent)

Being thought of as/being called weak

Failing to protect the Master Emerald

Rouge messing with him
Romantic Interests
Rouge the Bat (Possibly)

Control of the Master Emerald

Knuckles was born and raised on Angel Island, though he does not remember who his family is, and believes to be the last of his kind. He also does not know why he wants to protect the Master Emerald so badly, but he figured that that was his purpose in life, and he was happy with that.

Knuckles makes his first appearance in the second part of Chapter 3, when he crashes through the attic window of the Hayes mansion, and sneaks up on Espio, startling him into falling on a pile of old antiques. After helping him up, Knuckles explains to Espio he is here because he sensed a Chaos Emerald there, and is using the Dark Blue Chaos Emerald as a "metal detector". Espio explains he is here because the owner of the mansion believes it is haunted, and he and Vector have to figure out what made her think that. Knuckles points out a banging sound coming from an old dresser, and Epsio opens it to find three baby chao, one black, one gray, and one white. After this, he and Knuckles conclude that that must be why Ms. Hayes thinks her house is haunted.

After he and Espio explain what they found in the attic, they learn that the chao have imprinted on Espio. He is among those that laugh as he tries to escape them, without much prevail.

The third part of Chapter 3 is taken from Knuckles POV in the 2nd Person. He is glad that he is not the one getting followed by the baby chao, not because he doesn't like chao, but because he prefers to be alone. He then decides to start looking for the Chaos Emerald in the mansion's basement.

Even though there is no light in the basement, Knuckles uses the Dark Blue Chaos Emerald he has as a flashlight. He sees the stairs as unstable, and uses his gliding ability to get down instead. He is able to get down, but crashes into a box, injuring himself. The Chaos Emerald starts glowing, and he takes that as a sign another one is nearby, and decides to look around. He finds quite a bit, but no sign of the Chaos Emerald. He turns the corner to find a lot of spider webs, some of which Vector may have crashed into earlier. Sensing that the next Chaos Emerald is somewhere behind the webs, he looks for something to cut the spider webs with, but doesn't find anything useful. He then decides to just use his hands.

When he tries to punch the spider web with his hand, it gets stuck, and tries to pull it out, but his foot ends up getting stuck. He is approached by a massive spider a moment later who tries to inject its poison into him, but by punching the spider with his free hand, Knuckles manages to free himself, and escape the basement.

Once upstairs, Knuckles finds Ms. Hayes' granddaughter standing by the door. She tells him he shouldn't be down there, because of the spiders, and that is why no one ventures down there anymore. Knuckles angrily asks her if she thinks he doesn't know that, but calms himself down, not wanting to go back to Anger Management classes. The girl offers to get her grandmother to clean up his wounds, but Knuckles declines, telling her he just wants to go home and take a bath.

Stumbling towards the door, Knuckles checks the time, 5 PM. He reflects to himself it feels like later than that. He checks his inventory, relieved to find that the Dark Blue Chaos Emerald is still there, and leaves.

So far, the only known difference in this universe from his canon counterpart is that he is slightly more playful, shown when he snuck up on Espio in Sonic Fanfiction. If he has any other differences, they are yet to be shown.

One of Knuckles' most well-known abilities is his superhuman strength, allowing him to do things such as breaking through thick walls, lift things several times his size and weight, shattering boulders to pieces, so on and so forth. He also has durability to match his strength.

Although not as fast as Sonic or Shadow, Knuckles can run at superspeed.

While he has fast reflexes, Knuckles is not very agile, but can glide through the air by trapping the wind under his dreadlocks.

He is a master at hand-to-hand combat and martial arts. 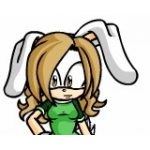