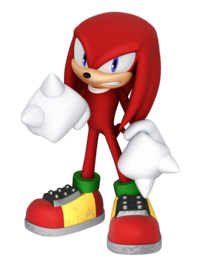 Like Sonic's other friends, Knuckles is in attendance at the International Festival of Community and is happy to meet Hope, though he commits a bit of a faux pas by mentioning Robotnik. He also gets flustered when Rouge mentions his ham hands to Hope.