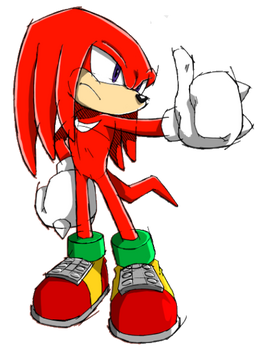 Knuckles the Echidna is a mobian echidna and the guardian of Angel Island and the Master Emerald.

Knuckles was born to Locke and Lara-Le and the older brother to Jenna-Le. Prior to his birth, the Knuckles Clan had reached out to the Brotherhood of Guardians, requesting an guardian for Angel Island with the threat of Dr. Eggman upon them. Locke performed experiments upon himself and Knuckles' egg later on to make Knuckles a strong guardian. After this, Knuckles' egg was handed to the remaining elder of the Knuckles Clan, who raised Knuckles as his own. From there, he was trained to become a guardian before his adopted father died when he was 10. From there, Knuckles continued on to guard the Master Emerald and Angel Island.

Knuckles is a mobian echidna slightly taller than Sonic with red fur and white fur forming a crescent mark on his chest, peach skin on his muzzle, and purple eyes. He wear over-sized sock-like cuffs with two spikes on the knuckles and red and yellow shoes with green cuffs and gray Lego-like plates. Like all echidnas, Knuckles has 6-7 dreadlocks and a short tail.

Knuckles most definable power is his super strength, as he can break through hard rocks with ease. He serves as the muscle of Team Sonic and the spikes on his knuckles add more oomph to his punches. Knuckles can also glide by trapping air into his dreadlocks and his spikes allow him to climb up walls and dig through the ground.

Through genetics and his connection to the Master Emerald, Knuckles can tap into the Chaos Force as will.

Knuckles is very independent and almost single-minded on focusing on protecting the Master Emerald and Angel Island. However, he is willing to shatter the Master Emerald in order to protect it from evildoers. He also knows when that a threat to the world also threatens the island. Knuckles is also quite gullible, hot-tempered and impulsive. He is not very patient, either.

Sonic is one of Knuckles' best friends and rivals. Because of their different personalities, the two tend to argue a lot, but this is just how they spend time together. Sonic always enjoys a challenge from Knuckles and often teases him. Despite their differences, they are willing to join forces to defeat Dr. Eggman.

Tails is a close friend to Knuckles. While Tails will unintentionally irritate Knuckles with his technobabble and Knuckles will tease Tails as well, they are good allies and friends and Knuckles is protective of Tails.

Knuckles and Rouge have had a strange relationship since their first meeting, due in part to the fact that Rouge attempted to steal the Master Emerald and Knuckles is sworn to protect it. Knuckles has often been the recipient of Rouge's flirtatious nature, and she delights in teasing him.

Although at the beginning they were partners, Knuckles is the third most formidable foe the mad scientist has, after Sonic and Tails, thwarting his plans most of the time. Knuckles is constantly tricked by Dr. Eggman as well, specially whenever Sonic's involved.

Julie-Su is Knuckles distant cousin.Having first met while on a mission infiltrating Eggman's Fleet, the two echidnas grew close as friends. While there is no romantic interest for either of them, they are close friends and even consider themselves as bros.

Retrieved from "https://sonicfanon.fandom.com/wiki/Knuckles_the_Echidna/Marshalia13%27s_Universe)?oldid=1853176"
Community content is available under CC-BY-SA unless otherwise noted.