Darkest Shadow, the author of Knuckles the Echidna/Darkest Shadow's Universe, considers this page to be unfinished. As such, some sections may change. 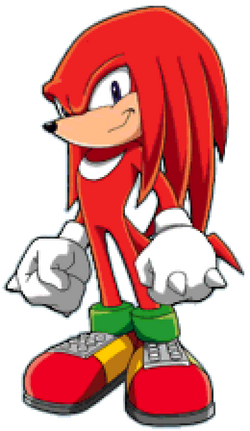 Knuckles the Echidna is a fictional anthropomorfic echidna created by SEGA. He is one of the strongest echidnas in the world. As of now, he is a good friend of Sonic, and boyfriend of Rouge the Bat.

Knuckles is serious, and independent. He usually works alone with his job of protecting the Master Emerald, and doesn't really ask for any help when fighting. Because of this, some people view him as a loner.

Knuckles also happens to be stubborn and short-tempered. He can get angered easily, and the people who make him this way regret it most of the time. He also never lets anyone touch the Master Emerald, which is another form of his stubbornness.

Knuckles stands at a good height of 3'6" tall, and weighs 81 pounds. His fur coat is a red color, and his muzzle is red. He doesn't have ears, but he can hear. He has dreadlock-like spines that go below his waist. His eyes are barely connected, and his pupils are puple. He has a zig-zagy tail too. On his chest is a cresent shape.

Knuckles has a complex appearance. He does not wear and shirt, or pants. He wears big white gloves with pointed knuckles and white cuffs. For footwear, he wears red shoes with a giant horizontal yellow stripe in the middle shoes, with green cuffs and a grey plate with six bolts on it.

Knuckles' trademark power is his overwhelming strength. He is said to be able to lift up to over 100 tons. Some of his strength involves punching through walls, breaking through metal, lifting an entire skyscraper, and so on so forth. This usually comes in handy when he destroys Eggman's machines, battles against someone like Sonic, or even lift up or break through boulders.

The overwhelming strength of Knuckles usually comes through his punches with his fists, and not really his kicking. Kicks and feet-wise, Knuckles isn't as strong as he is with his upperbody, but his kicks are also above-average, as they can break through walls.

Like most characters, Knuckles happens to posses superspeed. His speed is almost to the point of unnatural, but he doesn't have 'superspeed' superspeed yet. He is able to catch up with Sonic or Shadow, and matches Tails's speed.

Knuckles also happens to know how to glide through the air, like he's flying. Because of his dreadlock-like spines, his spines catch the wind and allow him to glide in any direction, always slowly coming down each time.

Like most of the characters, Knuckles happens to posses high acrobatic skill and talent. He is able to perform tricks in the air, such as multiple flips, and land perfectly. He also has the balance to grind on rails without breaking a sweat or falling.

Retrieved from "https://sonicfanon.fandom.com/wiki/Knuckles_the_Echidna/Darkest_Shadow%27s_Universe?oldid=1548881"
Community content is available under CC-BY-SA unless otherwise noted.