Klinx is a weasel in the truest since of the word. He’s sly, cunning, and you can’t trust him as far as you can throw him. He’s a smooth talker and displays confidence, while in reality he’s more of a coward. He will try to talk himself out of any situation, and if he can’t he’ll run rather than face it. He has a tendency to always go for the winning side, he’s not above betraying his allies. However he knows better than to betray his teammates Slash and Macro. Deep down inside he really is loyal to them and would help them despite his generally selfish nature. He generally takes on a charming and sophisticated demeanor; however, he can be sarcastic at times.

Because of his relationship with Slash and Macro, as well as his many other new friends, Klinx is becoming notably more honest. When he meets someone his friendliness is becoming more genuine and less for personal gain. Basically, he is coming to where he'd be more easily described as a "reformed con artist". He still keeps up his charming attitude, but with better intentions such as just making people feel better rather than tricking them. He's also more likely to help his friends recognize a fraud, which he is able to do due to his own knowledge and experience. Klinx is useful to have around as he can help determine a person's intentions and other things about the situation.

Klinx has black fur with grey fur on his stomach and face and green eyes. He has slicked back hair that goes all the way down the back of his head. His body is long and slender and he also has a slender, stiff tail, a long snout, and small rounded triangle ears.

Klinx's voice is clear and somewhat smooth, although a little nasally. It typically has a forthcoming and friendly tone that tries to get you to trust him. The pitch is medium to low.

He knows how to drive and hot-wire vehicles. In addition he can slip through small places easily, scurry quickly on four legs, and pick locks and pockets. His weaknesses include the fact that he can not swim and has little offensive ability, being rather physically weak. Thus, he can't really "fight" in the same sense many Mobians can.

Klinx was born in a peaceful woodland area in the Hilltop Zone where he lived with his mother, Lila, for most of his younger life. His father, Snike, was a con artist who was off “working” most of the time. Despite his relatively peaceful upbringing, Klinx desired more excitement and moved to the big city. Following in his father’s footsteps, he became a con artist to support himself.

One day he got mixed up in a situation when he conned the target of then bounty hunter, Slash the Cat. The target was none other than Macro the Giant Hedgehog. The transaction went quite normally, other than Klinx’s awe at Macro’s size. But as Klinx was walking away quite pleased with himself, he was approached by Slash who demanded the location of Macro. In his usual fashion Klinx tried to get something out of the disclosure of the information, but Slash was impatient and refused any nonsense. Instead she physically threatened him and dragged him with her to find Macro. When they found him there was a confrontation, but they eventually found out that Slash had been set up by Eggman. At Klinx’s direction the three joined together as a team to take down Eggman (*cough*Sonic Heroes*cough*). He now lives in Station Square with Slash and Macro.

Although Klinx and Slash are teammates and friends, they don't always get along so great because of their differing views. Slash gets frustrated with Klinx frequently.

Macro and Klinx are best friends. They are frequently seen together, notably with Klinx riding on Macro's shoulder. Klinx has gotten Macro into trouble on many occasions by talking him into stuff.

Katie has a crush on Klinx which began with his charming introduction to her. Katie's crush greatly intrigues Klinx and Klinx as developed a crush on her in return. See: Klatie

Klinx is still fond of Brittney, despite how "different" she is. He finds a certain charm in her naivety, but also enjoys how easy it is to take advantage of.

Klinx doesn't see his father often, but when he does it can be rather awkward. Despite this, Klinx still secretly cherishes some childhood memories of him and his father.

Klinx is rivals with Edge for the sole reason that he likes Katie.

Sparky trusts Klinx and admires his sense of humor, and is usually very happy whenever he helps. One notable event between the two was a snowball fight. Sparky used his Super Peel-Out to smash Klinx into the snow in a fit of rage, but he quickly said sorry to Klinx after the blow. Sparky enjoys how forgiving he is to him.

Ditzy is Team Weasel's dim-witted neighbor that lives in the same apartment building as them. Normally Klinx is rather patient but Ditzy grates on his nerves. Ditzy especially bugs him with his stupidity in trying to do "neighborly" things.

~"Alright, now who's the best at fighting monsters? Well whoever it is, I'm going with them" - (Lost in the Labyrinth)

~"So one of us has to be "brave" enough to plunge right into what might be a trap?" - (Lost in the Labyrinth)

~"Dumb? No! I'd say rather that you look smart enough to make a good bet!" - (Elemental Tourney)

~"Yes, we're not exactly aquainted. But I couldn't refuse the invite." - (A Jeeperchomp Whodunit) 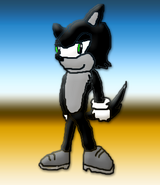 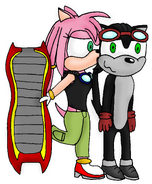 Klinx being kissed by Katie after a race 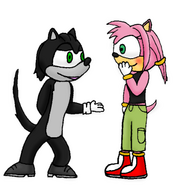 Klinx in his reading glasses

Klinx sprite (Credit to BubblegumTheCat for the base sprite)
Add a photo to this gallery
Retrieved from "https://sonicfanon.fandom.com/wiki/Klinx_the_Weasel?oldid=1574861"
Community content is available under CC-BY-SA unless otherwise noted.