SnowlessWinter, the author of Kiyo the Amanojaku, considers this page to be unfinished. As such, some sections may change. 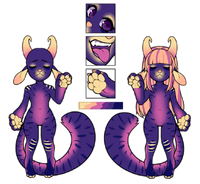 Kiyo stands at five feet, eight inches and resembles a hybrid of a cat and goat when disguised. Her fur is mainly indigo with pale magenta accents on her stomach, chest, wrists, hands, and the underside of her tail. The tips of her fingers are a sunset yellow as well as her toes, a splotch between her eyes, and stripes on her shoulders and knees. Dark indigo marks litter her body except for on her stomach, chest, face, and forearms. Kiyo's horns and the inside of her ears are a soft gradient between yellow, orange, and a bit of magenta. Her hair is straight cut and white with a tinge of magenta and indigo at the ends.

Kiyo comes off as mature and gentle when you first meet her, having an air of professionalism surrounding her. She's quite calm and can sometimes come off as motherly at times. Underneath her caring facade, Kiyo is actually very manipulative and violent, going as far as abandoning her closest friends if they disobey her or no longer hold any use. She wishes to have everyone bow to her and fulfill her every need as an Amanojaku.

Retrieved from "https://sonicfanon.fandom.com/wiki/Kiyo_the_Amanojaku?oldid=1817533"
Community content is available under CC-BY-SA unless otherwise noted.