Kit is a human from an alternate Earth, where Sonic the Hedgehog is only a videogame. Her whole life was normal until the last day of middle school, she was sucked into a portal and was sent to Sonic's world, where she turned into a cat. She made new friends, found her true love Shadow the Hedgehog, her best friend Knuckles the Echidna, and a rival, the hedgehog himself, Sonic! She is now the leader of Team Dawn and is also a member of Team Emerald.

Kit is a optimistic and cheery cat girl and enjoys an adventure from time to time. Just like a cat girl she acts like a cat at times. She has as much attitude as Sonic and is cocky at times. She does not like to get ticked off, she also has anger problems. She is a great fighter and will do anything to protect her friends. She often enjoys taunting Sonic as a sort of entertament. Despite her additude and cockiness she can be quite courtious. She loves pizza, chili dogs and seafood. Just like a cat she goes crazy over catnip. She is also very flirty. She has also been given nicknames like Cat Girl, Kitten (this is Shadow's pet name for her), Fastest Girl Alive,and Queen of Speed.

Kit runs really fast and can go about as fast as Shadow. She has awesome ninja skills and can use a katana very well, all of this she learned from Espio (and is still learning from him). All of her moves invovle kicking, sorta like Rouge. Here are all her known moves:

She also has a super transformation called Ultimate Kit. Her fur turns white and a golden aura surrounds her and she gains the mighty golden katana. It is unknown how she became her super form but when she turned into it she said she felt a strong jolt of power inside her. In her super form she has boosted speed and power. She also knows how to use Bazooka but is often used for comic relief purposes only. She also knows how to play the electric guitar (but only in Sonic Ultimate Band).

Kit isn't too good at math, hates heights, she can get carried away with her attitude and cockiness, and is extremely scared of spiders.

Relationships With Other Characters

Knuckles the Echidna (best friend; helps him protect the Master Emerald)
Sonic the Hedgehog (friend and rival)
Amy Rose (good friend)
Espio the Chameleon (taught her ninjstu and is a good friend)
Charmy Bee (considers him a friend and babysits him often)
Honey the Cat (good friend)
Razz the Bat (second best friend)
Krystal the Arctic Wolf (formerly an enemy, now an ally and friend)
Melody the Butterfly (a friend or ally when she's not being annoying)
Jude the Fox (third best friend; he used to have a crush on her)
Serene the Foxcoon (friend)
Kyle the Raccoon (good friend) 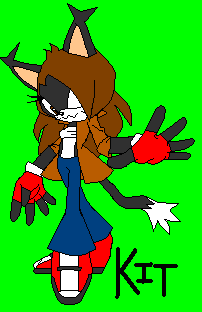 "Whoo who! Got it!" After getting A rank

"Yes! Made it!" After getting B rank

"Uhg, this is so embarassing." After getting E rank

"Get ready for the queen of speed!" After being selected

"Bring it on!" Before a battle

"Heh heh, I'm I too much for ya?" After winning a battle

"Hey there Slow!" When taunting Sonic

Retrieved from "https://sonicfanon.fandom.com/wiki/Kit_the_Cat_(2008-2010)?oldid=1433416"
Community content is available under CC-BY-SA unless otherwise noted.