The author of Kiritsugu Emiya considers this page to be unfinished. As such, some sections may change. 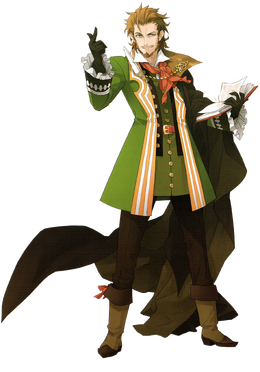 "Remember Skyfly, it is not the story that makes it compelling, but the characters and how it plays out that brings in the audience."
—Kiritsugu to his foster daughter

Kiritsugu "Shakespeare" Emiya is a Human S-Class British Magus and the Grand Alchemist from the human continent of Great Britain. He is known to be a highly renowned play-writer, script-writer, poet, and musician. He appears as one of vacationers in Let's Cruise!, a guest in Skyview Resort and also as one of the main characters in the Grand Series.

Being the Grand Alchemist, he is able to invoke the Root of Gaia into his alchemy, performing alchemy feats beyond anyone on Mobius.

Kiritsugu was born to Kiri Emiya and Hikari Emiya in Great Britain 35+ years before the Infinity War. Being in a family trained in the use of Magecraft, he was trained to become a exceptional Magus in his childhood up to his late teens where he was accepted into the Grand Order Institution to train Magi with greater knowledge and advance Magecraft. Throughout his late teens into adultery, he has skillfully mastered many crafts, including Alchemy. However, he has shown great exceptional mastery over illusion-based crafts such as Projection. He refined his Projection to be able to form "physical manifestations" of illusions to be able to physically interact with the material world.

After he had graduated, and is official recognized as a Magus by the Mage's Association, he is given the Emiya Family Magic Crest, runes and glyphs in the form of a symbol of the family, and having the family's magical secrets in it. He is able to use these spells without the need of incantations or gestures and simply need to have Mana to run through them, and think of the spell to cast.

After gaining the crest, he moves from magic and studies to become a play writer and novelist, to which he became a national success with of his A king's Tale epic-romance action novel, and due to his success, created original plays which became one of the most famous pieces of plays in Great Britain. Eventually, he had began to have a carer in script writing. He had written most scripts in his plays, and eventually lead him to make novelizations of his plays so people can read them.

His also does his own music for his plays, writing down the notes of various instruments for dramatic effects, and tragedy, earning him collaborative works with other music writers.

Kiritsugu is a gentle and also a eccentric man who cares deeply for his works in his respective subjects. He takes criticism very seriously which helps him get to where he is now. He is shown also act bigger then his is, stating his works are great, and should be seen by all over the world. Despite his gentle side, he has shown to be quite arrogant in his abilities as a magus, due to the fact many praise his Projection, he gets cocky and can depressed when one shows greater skill in anything. Regardless of this, he uses this to learn and analyze them to get a better grasp so he may rise to the challenge and win over them. He has been shown to take interests in his surrounding, ans also other individuals and acts odd to certain people. This was shown when he went as a guest to the Skyview Resort in Mobotropolis, when he acted dramatically to Felica the fox, the manager of the resort.

However, due to his unfamiliarity to the outside world of Great Britain, he gets even more eccentric when it comes to how technology has advanced over the years. He gets odd when shown such, and believes are constructs of true magic, gathering energy from the Root of Gaia itself.

Note: Events occurring in this fiction are only in the non-canon to Kiritsugu and do not follow canon material of Grand/Order .

He walks in one of the docks as he spoke on the novel he writing and how he should advance it further before declaring about someone called Aldfor fighting someone as he enters the club.

Note: Events occurring in this fiction are only in the non-canon to Kiritsugu and do not follow canon material of Grand/Order .

Click "show" to read role.
Kiristugu is visiting the Skyview Resort so he may get some well deserved rest from magecraft, and sorcery. However, when he got off the but to greet everyone in a odd, eccentric way by posing and declaring, no one seemed to greeted back. Which somewhat sadden him but hide as he asked the manager, Felica on the rooms they be staying.

Retrieved from "https://sonicfanon.fandom.com/wiki/Kiritsugu_Emiya?oldid=1852726"
Community content is available under CC-BY-SA unless otherwise noted.