This is an article about King Romulus the Wolf, a character created by Jaredthefox92 on 10/12/2015. 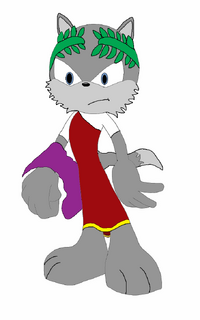 "My brother is an idiot."

-Romulus disagreeing with his brother.

King Romulus is believed to be the founder of the kingdom of Soleanna, as well as a demi-god heir to the god of war, 'Mars'.It is believed that he has a brother named Remus, however it is unknown what fate had befallen his brother as this is up to speculative debate.

Romulus appears as a tall, (about four feet) Mobian wolf with grey fur and light grey secondary colors. He possesses blue eyes and is known to portray a serious and stern expression upon his face, (with a hint of malicious intent.) He is known to be stylized after real life Roman leaders and why wears a toga akin to what ancient Romans would wear, as well as decorative cloth and laurel wreath to show his position.

Romulus is a very ambitious and tempermental man. He does not tolorate ignorance, foolishness, or idiocy in general. He is known to be a stern, yet fair ruler, (if not a bit bloodthirsty.) It is even belived he either killed or ordered to kill his own brother to settle a settlement dispute about the founding of his prized city.However, Romulus has done a lot for Soleanna including forming the first senate and 'legionares' to defend ancient Soleanna.

Legends say he was raised by a human woman who nurtured his brother and himself as they were carried by basket down the Tibris River. The woman nurtured both Romulus and his brother Remeus until they grew older. Eventually both brothers started to quarrel over where the founding location of Soleanna should be settled. With Romulus taking power he went ahead and settled on a mountainside overlooking several mountains. What happened to Remus is unknown, but it is believed that several tragic events may have transpired. Romulus may have used his natural given powers bestowed upon him to challenge and killed his brother in a duel, Romulus may have pushed his brother off the side of a wall that he made to protect Soleanna.He also may have had his brother arrested in secret by his legiions and murdered behind closed doors. The founding story remains a mystery to this day.

While normally Romulus doesn't show off his supernatural powers except when the plot or story calls for it, he does have some powers handed down to him from his father. Such abilties include:

Romulus has inheretited the power from his father to alter his own size to become a 'titan', (giant). However due to his more constructive nature he rarely would use this power unless threatened by somoene with powers as well.

Romulus is able to summon 'legion' guardians as well as personal guardian lions. It is belived these are either zombiefied,mystical constructs, (or even creations of the Fighting God).

An inspirational painting of Romulus in real life.

Add a photo to this gallery
Retrieved from "https://sonicfanon.fandom.com/wiki/King_Romulus_the_Wolf?oldid=1628973"
Community content is available under CC-BY-SA unless otherwise noted.