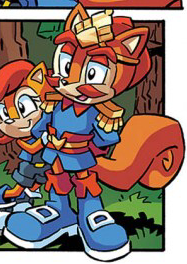 Nigel Acorn is a mobian squirrel and the ruler of the Kingdom of Acorn and the father of Sally and Elias Acorn.

Nigel is a mobian squirrel with brown fur, light brown fur on his face patch and inside his ears, and blue eyes. Like his daughter, his has dark arburn hair and eyebrows. He has a short and smooth moustache as well and smoothed-back hair held back by his golden crown. Because he's a squirrel, he has a big, bushy tail.

Nigel wears a blue suit trimmed with red at the collar. elbows and bottom, with a gold belt with an acorn buckle and gold epaulets. He also wears white gloves with blue boots similar to Sally's, but has red cuffs.

Nigel was born to Fredrick and Alcia Acorn sometime after the Great War. As a teenager, he fell in love with Eleyna Acorn, whom he was arranged to marry. At the age of 18, Nigel accepted his father's mantle as king.

Nigel was a loving husband to Eleyna prior to her disappearance, a loving father to Elias and Sally, and a just ruler. At one point in his past, Dr. Ellidy, one of his royal advisors, retired from his service. Nigel wished Ellidy well and watched as Sally said her good byes. After Ellidy gave Sally an hand-held computer that hosted an advanced AI, Nigel suggested the name Nicole, one of his ancestors.

Some time afterward, Nigel made the mistake of trusting Walter Nagus and Dr. Ivo Robotnik as royal advisors. Tricked into believing that the United Federation was planning some form of attack on the Kingdom of Acorn, Nigel let Dr. Ivo Robotnik and Julian Snivley into his kingdom and full use of his resources. Dr. Robotnik's schemes succeded, resulting in both Nigel and Walter, betrayed by Robotnik, being banished into the Special Zone while Robotnik, renaming himself "Dr. Eggman", conqured Mobotropolis.

Sometime later, Nigel was rescued by the Freedom Fighters, led by Sally Acorn and Mobotropolis was restored. Despite Sally's fears, Nigel, while concerned about his daughter's safety, let her continue as the leader of the Freedom Fighters while he maintained his position of king.

Nigel is very considerate and jovial. He is a loving family man who shows great concern for his children, but has faith in their abilities. He is a fair and just ruler, but has some resentment towards the United Federation.

Nigel is a natural-born leader and is skilled with the use of a sword.

Much like Sally, Nigel wears a pair of bracelets that generate an energy sword and shield, much similar to Marsha's, which he uses in combat.

Retrieved from "https://sonicfanon.fandom.com/wiki/King_Nigel_Acorn_(Marshalia13%27s_Universe)?oldid=1787269"
Community content is available under CC-BY-SA unless otherwise noted.