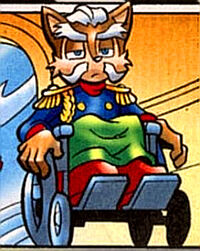 King Maximillian II (born Maximillian Yves Joseph Charles Albert Alexander Acorn November 18, 1939 - July 17, 2016) also known as Max, and Maximillian the Determined was the King of Alba from 1959 to 2016. He was the son of King Alexander III (1900 - 63) and Queen Louise (born in Hesse Kassel 1901 - 2003). His reign was at a time when the government of Alba was on the verge of collapse but, his wise and just personality and his liberal ideals prevented this catastrophe from happening. He received the nickname Maximillian the Determined from the fact that he didn't let Stone Man Syndrome keep him from performing his royal duty. He was succeeded by his eldest son, Elias following his death. He cousins were; King Myles I, Queen Elizabeth II of the United Kingdom, and King Harald V of Norway (who became his brother-in-law when he married Princess Maud).

Maximillian II was a brown Mobian squirrel with brown fur and blue eyes. His height was 5 foot 11 inches. He typically wore a royal uniform coloured blue with gold epaulettes. His pants were black (resembling the pants George V of the United Kingdom wore in his coronation portrait). He also wore dark purple boots (In his later years, he wore red boots). When he wore a cape, it was usually coloured red. His crown resembles the crown of Bolesław the Brave of Poland. His hair, eyebrows and mustache colour was originally an auburn but, due to age and deteriorating health, his hair, eyebrows and mustache became a light grey colour.

Maximillian II was a devout Catholic who would never go against his beliefs to the point that he even requested the government to deem him unable to rule for a day so he wouldn't have to sign into law a bill which would legalize abortion in Alba. He also was a good father who would make sure that he wasn't spending too little time with his children. As King, he was a wise and just ruler who lead his nation through a time when it seemed like Joynerland (North Alba) was going to declare independence from Alba but, his liberal ideals such as allowing autonomy to Joynerland prevented this catastrophe from happening. He even prevented a linguistic divide from happening. Even when he was confined to a wheelchair due to Stone Man Syndrome, he was determined to not let the disease prevent him from performing his royal duties.

Maximillian II was born on November 18, 1939 to King Alexander III and Queen Louise. His great-uncle was former Kaiser Wilhelm II of Germany. Four months later, King Haakon VII's family was sent to Alba to escape the Nazi occupation (Haakon stayed behind). Among the Norwegian Royal exiles was Maximillian's future wife Maud, who, when they were old enough to talk, got along perfectly well with Maximillian during her 5 year stay until the German occupation of Norway ended in 1945 in which the Royal exiles went back to Norway. During the 1950s, he hung out with his second cousin once-removed Myles McCloud. On August 6, 1959, Alexander III resigned due to rumors that he collaborated with the Nazis and even gave them weapons and Maxmillian became King Maximillian II of Alba. During his reign, he prevented Joynerland from declaring independence, he became a member of the Supreme Order of Christ, and he even refused to sign into law a bill which would legalize abortion in Alba to the point that he requested the government to deem him unable to rule for a day so he wouldn't have to sign. In 1969, he was diagnosed with Stone Man Syndrome which is incurable. However, it was until 1994 when he had mobility issues. At first, he had to use a cane, then he had to use a walker, and finally he had to be confined to a wheelchair. However, he was determined to not let the disease keep him from performing his royal duty. This determination made people admire him even more. He died in his sleep from asphyxiation due to the Stone Man Syndrome on July 17, 2016. Upon the news of his death the following day, people from all over Alba came to the royal palace gates to drop off flowers. A viewing of the body was then held on July 19, 2016 with everyone in Alba waiting in line in the sweltering heat to see their King for one last time. Many world leaders from all over the galaxy attended the funeral including but not limited to; Barack Obama, Queen Elizabeth II of the United Kingdom, François Hollande, and the Emperor of Japan.

King Maximillian II was interred in the royal vault at St. Mary`s Cathedral in Mergiston. He was succeeded by his eldest son, who became King Elias.

Maximillian II had skills such as:

Retrieved from "https://sonicfanon.fandom.com/wiki/King_Maximillian_Acorn_(Sargon%27s_Progeny)?oldid=1826289"
Community content is available under CC-BY-SA unless otherwise noted.