Kimiko is a 5-year old white wolf who is often curious about the outside world...and to be mistaken for a boy!

Kimiko has a cheerful, friendly character. She almost gets along with everybody.

She is often known to have a plushie that looks similar to Chuih, one of the ChuChus.

She usually hangs out with either Sonic or Shadow. If Sonic (any of his friends or alone) She acts like herself. Cute, cheerful, questionable, and friendly, but if Shadow (or any tough character) are around she tries to act brave and fearless but ends up tumbling down to the ground by her long, long shirt or just gives up her act.

Her history seems to be unknown

Kimiko is outgoing, sometimes shy, cheerful, often quiet, most of times loud, a crybaby at scary times, brave and fearless when Shadow's around, and sometimes a little random.

Kimiko spins which makes a miniature tornado, when she stops, the tornado is still there and then hits the person she aims at. She also has small, sharp claws she can use. Kimiko also has a "super" form obviously called "Super Kimiko" where she has a cape that is Super-Shadow colored and has the letters S and K in red printed on the back. In this 'super' form Kimiko thinks she's invincible and can defeat anybody. She also has a science of smell and can track anything and can hear really good.

Kimiko has a "super" form, obviously called Super Kimiko. When in this "form" her grayish blue markings disappear, gets a Super-Shadow colored cape out of nowhere, and she thinks she's invincible like the other super forms. Her theme is "Chopperman" but in her version it's "Kimiko!"

Lyrics **the song in the video says things CLOSE to it but not all of it. What I mean is that the video only says things about Chopperman, not Kimiko**

The bright yellow MANTLE sparkles She does, she comes To protect Mobius's peace Our HERO

Go! Deadly KAWAII SPARK! A MIRACLE that can't be kept secret, with your CUTENESS Even the hearts of the evil will go MERO MERO*

The LUCKY COLOR is always YELLOW! DOUBLE PEACE in everyone's HEART!** The ally of justice, Kimiko!

(NARRATION) Important explanation. Super Kimiko is A riddle hero that, with the MANTLE inherited from Sonic, Flies through the sky, the young SUPERHERO of Moubius.

The MARK of justice is always an "S"! Courage and strength are WONDERFUL! COOL and CUTE and beyond good, Kimiko!**

(NARRATION) Important explanation. To notify Super Kimiko, The assistant tries to charge an exorbitant remuneration. Therefore, those eye-witnesses are quite rare.

To go Mero Mero here means like something "melting" because of the cuteness.

Interactions with Other Characters

"Mr. SpikeyGoosie is my bestest friend!" 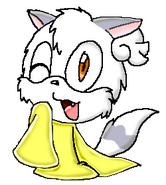 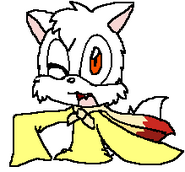 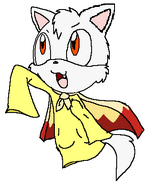 Add a photo to this gallery
Retrieved from "https://sonicfanon.fandom.com/wiki/Kimiko_the_White_Wolf?oldid=1779683"
Community content is available under CC-BY-SA unless otherwise noted.