Start a Wiki
This is an article about Kimi The Hedgehog, a character created by Cheesie22 on 07/10/2013. 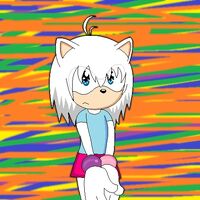 To make up for her lack of coloring in her fur, Kimi likes to wear colorful clothing that follows a similar pattern everyday. While Kimi changes her outfit everyday, she will always wear a plain shirt that is a shade of blue, light blue and cyan being her favorite and most common, paired with a skirt that contrasts the shirt such as a vivid pink or red. The bracelets around her wrists are made of plastic and are always the same purple-pink combo. Kimi usually wears tennis shoes that are a neon color, such as orange and day-glow green. Other than Kimi's color fashion sense, she can be easily identified by the two curls which stand up atop her head.

Kimi is a very shy person and is easily embarrassed. She has trouble making friends and meeting new people because of this. Kimi is also easily scared so little things such as spiders and the dark, so she doesn't go outside often other than when she has to. Kimi is often alone because she doesn't have many friends, but she doesn't like being alone at all.

Kimi grew up in a large family, the sixth child out of eight. When she was younger, both her siblings and children at school would tease her because she was the only one born without coloring in her fur. She was often called things like "Albino" and "Too stupid to have color." This led to her becoming shy and withdrew from others the older she got and that also started her colorful fashion sense. Despite being colorblind in her left eye, she actually liked the colorful outfits she wears. Since she's grown up, she hasn't been in touch with any of her siblings or her parents.

From an early age, Kimi would have vivid dreams about people she'd never met before. These dreams were often strange and hard to decipher. Like a bad nightmare, she couldn't control it or wake up and was forced to watch what would usually be a person getting critically injured or killed. Since the dream was often blurry and distorted, she couldn't tell what was going on and still struggles with it in adulthood. She would never tell anyone of these dreams, for fear of getting teased or sent to a mental hospital, and not once has she had a dream about someone that she knows.

Besides her premonition, Kimi has an usual ability that most people find even weirder than her psychic-dreaming. Sometimes Kimi will zone out for a few moments before then telling someone the next thing they're going to say. Many would consider this a "power" or supernatural ability, but really her mind is processing what the person is saying and their personality which let's her predict what the person is likely to say next.

As said earlier, Kimi is very shy, easily embarrassed, and scared of many things. All of these are weaknessess in their own way. Other weaknessess she has are that she is physically very weak, a slow runner, and she's not very brave.

Retrieved from "https://sonicfanon.fandom.com/wiki/Kimi_The_Hedgehog?oldid=1799948"
Community content is available under CC-BY-SA unless otherwise noted.