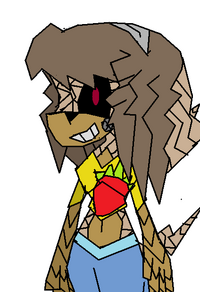 Kim is a nice,friendly,and loyal girl.Despite being roboticized she still contains the same personality she had when she was young.One of the reasons she may still have her old personality is because she's a bit of a ditz.Her confused and ditzy personality always makes dependable on who she considers her best friend,Oxanna.Oxanna often ropes Kim into her schemes and plots.

Kim remembers she was an only child born to two echidnas in Liberty City.When she was young and growing up everything went well in her life.She was often became dependable on other people to take care of her.Eventually her parents discovered she had problems breathing because of the industrial state Liberty City was in.Her parents decided to take her to the country to get her away from the smoke and smog in the city.

One day Kim lead some of old robots of Eggman's to the country and they roboticized everyone she loved and knew.She was also roboticized.However,being roboticize ony changed her appearance to a more robot like state and her personality and thought process remained the same.She can barely feel emotions anymore,but knows not to hurt people and knows when people are hurt.

Since she was roboticized no one would go near her and often feared her.She was all alone and had to wander about alone.Eventually she would meet another roboticized Mobian.Her name was Oxanna and Oxanna took Kim under her wing.Meeting Oxanna would be a big mistake as Oxanna was evil,but hid being evil from Kim very well.The two currentley reside in Liberty City.

"You're such a nice person,but I have to go!"~Kim saying good.

Retrieved from "https://sonicfanon.fandom.com/wiki/Kim_the_Metallic_Echidna?oldid=1541419"
Community content is available under CC-BY-SA unless otherwise noted.