Kiera is a 14 year old sort of bookish bat.

Special Attacks: Kiera can freeze things at will,

Likes: spicy food, books, her friends and family, online games, joshua the mouse, any color of blue or teal,

Hair: light brown with bangs that cover one and is short in the back

Gwen the mouse Nera the mouse

Gwen the Mouse (friendly rival), Storm the Albatross (racing only)

Relationships With Other Characters

Gwen walks in on Kiera in her room and here is what went on:

Kiera: No! This is my room!

Kiera: Thats right! Dad says I can have any room I want!

Kiera: But nothing, my Dad owns this place now!

Kiera: Well we could have a contest....

Kiera the bats extreme gear is called frozen ice, its a speed type and can grind the design on it has dark blue swirls all over it and its a lighter blue as the base color. she attacks by throwing ice balls at you that freeze you in place for three seconds.

Kiera was afraid of the dark when she was little and slept with a night light.

This is Kiera as a genie from sonic scret rings 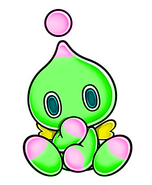 This is Kiera's chao Ina
Add a photo to this gallery
Retrieved from "https://sonicfanon.fandom.com/wiki/Kiera_the_bat?oldid=383466"
Community content is available under CC-BY-SA unless otherwise noted.