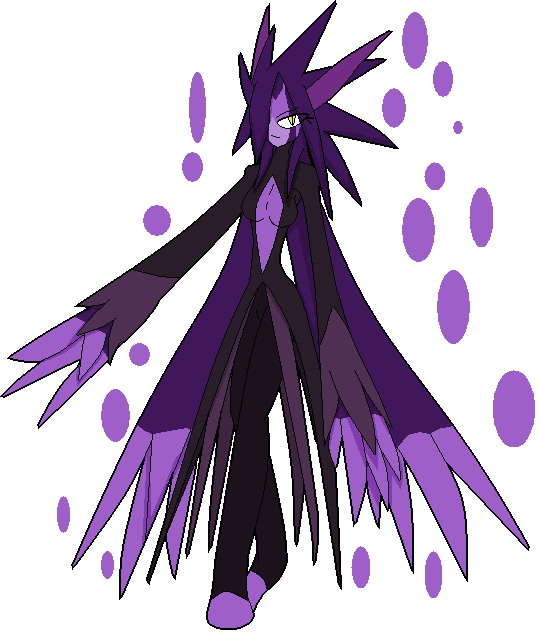 Place of Residence: None

Birth Date: None given

Kia is a rather strange looking creature at first glance, her skin wears at least four shades of purple. Most of her skin is thistle-colored. Her face possesses persian blue thick line markings running across her eyes vertically. Her spiky hair, also the same color as her markings, point out in slightly different directions with a thick bang covering the right side of her face. However, the 'hair' extends below her waist and splits into two 'arms'. Her only visible eye is a yellow color with a slit pupil. Growing from either side of her head are long, purple-colored horns. Most of her bodily mass is thistle-colored with her feet and fingers being the same color. Her arms and legs possess a persian blue color. Her arms are long enough to touch her feet without bending over and end in four long, claw-like digits.

Body Structure: Despite her odd appearance, Kia maintains a lithe and proportioned physique.

Attire: Kia's only attire consists of a dark eggplant-colored coat similar to Blaze's but additional tails located beneath it. The sleeves end in a lighter shade with large tattered cuffs. She appears to wear a form of dark-colored pantyhose though it cuts off just near where her toes would be.

Gear and Accessories: None

Intelligence: Despite her disposition, she seems to know a lot about the world than some people may think. Her experiences with having traveling around the world have told her a many things. Despite the lack of a grade school, she seems to know a good deal about geology and liquids and speaks fluent English, all from having studied them through her bonding ability. While she has a basic understanding of math, she's no expert.

Personality: Kia is a rather oddball. At times when happy in general, her mannerisms suggest she would be a cat, emitting sounds like one. She also has a tendacy to get distracted completely when interested in something. Sometimes it'll appear as if she is in a trance. Her dark appearance belies her friendly disposition however and shows general concern to anyone she may befriend. In times of desperation or confrontation however, she adapts a survivor mindset. This however, maybe more of an instinct than a personality aspect.

At times, she speaks cryptically, as if she knows more than she's letting on, adding a mysterious atmosphere to her.

Hobbies and Interests: Kia has a deep interest in exploring and adventuring. Never standing in one place for too long, she is constantly on the move, apparently motivated by the phrase 'learning something everyday'. In return for curiosity, she is granted knowledge about the world like any other adventurer.

Likes: Kia apparently has strong liking for anything colorful. If her eye is focused on a colorful palette, she will remain in a complete trance. Also has a liking for spicy foods and meat in general.

Dislikes: If there is anything Kia dislikes a lot, it's the cold. She will shiver and shudder at the least cold breeze and it often leaves her sneezing for a while, as she has been in traveling through the cosmos for hundreds of years. Due to a previous encounter, she has a disliking towards bubble gum. 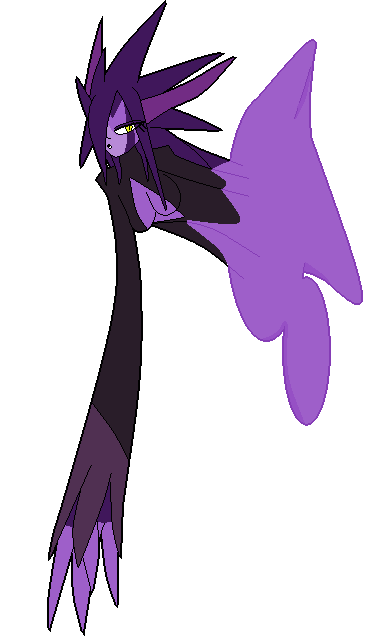 Mental Advantages (in combat): Combined with her incredible durability, Kia can easily determine the force of the blows inflicted on her and can deduce any possible ways to counter or prevent her opponent from attacking again so long as it's physical related.

Physical Disadvantages: Kia has a severe aversion towards the cold. Such low temperatures can and will harden her body and effectively disable her. Ice-related attacks will leave Kia brittle as glass. Though she can recover from this, the recovery time is increased and she'll always end up ill after the ordeal.

Mental Disadvantages (in combat): Kia only excels at physical combat and little else. Thus, she is easily caught off-guard by non-physical abilities and attributes, mainly in magic.

Abilities: Kia's body is entirely made out of a metamorphic liquid substance, able to alter, stretch, harden or liquefy her body at will. She possesses a second set of arms growing out of the back of her head, which she can use to glide, attack and haul items. She is also able to separate parts of her body where they can take lives their own. However, they have limited mindsets and only follow the simplest of instructions given to them. Taken on the form of shapeless blobs, they possess lesser aptitude than Kia herself, but the general same abilities.

Despite her appearance, Kia's actual mass is compressed into a more compact form. Thus, despite her physique, Kia is much heavier than normal people of her size, which also explains her super strength.

Kia's foremost special ability is symbiosis: the ability to bond with others. By applying herself to one's body, she can augment their general abilities, and often adds in an extra appendage, commonly an arm, to aid one in combat.

Friends: None at the moment.

Enemies: None at the moment

Rivals: None at the moment

Overview: Kia is an extra-terrestrial hailing from a distant planet. Originally known as Kamorphia, she was created as an organic device meant to augment lifeforms by bonding with their bodies. Eventually, she gains a conscience of her own, fabricated from the emotions she experiences with each host she has bonded with giving her the mindset of a soldier longing for peace and defects from her creators, becoming 'rogue'. Not wanting to involve herself in wars, she goes into hiding, secluding herself from view. A high bounty was placed on her head which made her peaceful graces progressively harder. As time passed by, her body evolved long enough to be able to fend for herself, having transformed into a snake-like entity, but it still was not enough compared to the hunters after her hide.

Attempting to leave her native planet to evade her captors, Kamorphia hitches a ride on a cruiser on a course for the Black Comet, hiding within the deeper reaches of the vessel. All but one of the hunters pursued her in spite of this. This hunter somehow manages to locate and cohere her out of hiding in which a fierce battle ensues. This hunter was on a completely different level of power and in no time, manages to overpower the slime. The fight rips apart more than half of the cruiser just as it closes in on the Black Comet. Reduced to fragments, the symbiote hides her remaining fragments into a piece of the comet and breaks off from its course where begins her hibernation. The low energy output from this clever move allows her to cloak her presence from her fierce pursuer. The piece aimlessly wanders the cosmos for hundreds of years. Soon enough, the meteorite crash-lands on Earth. Awakening for the first time in centuries, she crawls away from her rocky bed and slithers into a quiet forest. Having lost much of her power and her mind hazy, the alien had reverted back a simple, but large blob, occasionally latching onto other wildlife to help regain her lost strength. A few days later, the goo had regained more than half of her former strength. Well enough, she begins to explore this new world in secret with a new name: Kia.

Curious - she gathers information on the wonders of this strange, lively planet without any worry of being hunted down - the alien for the first time in her life - was able to completely enjoy peace, aside from the few imminent dangers that became apparent, due to the schemes of a mad scientist known as Dr. Eggman. Fortunately, all of these dangers had been averted time and time again by a blue, supersonic hedgehog who called himself Sonic. Kia eventually stumbles onto a ruined but still functional laboratory and spots another hedgehog, covered in armor and being revitalized through unseen machinery, which she took for some kind of magic. Attempting to take a closer look, the hedgehog suddenly revives and almost bursts into a wild rage, attacking Kia for a solid moment whilst screaming 'SONIC' before he calms down. Standing almost perfectly still for several minutes, the hedgehog suddenly takes off.Curious about this particular creature and an apparent connection with the heroic hedgehog, Kia follows the hedgehog to discover this apparent 'connection' between the two hedgehogs.

Intended Role: Kia's attended role is more like the 'observer', often watching and monitoring things from a distance while Rhapsody does all the hard work. When she steps in though, hell breaks loose.

Significant Meanings: None. Though the word 'Symbios' comes from the word 'symbiosis' which in Greek means 'living with another'.

Incorporated Concepts: This character is based on the original character, Kia, which I had created years ago. Her ability to shapeshift, liquefy and fuse with others are taken wholly from said character.

Trivia/Miscellaneous Information: A previous version of the character was created around 2007 when Kia was revamped. The result was a purple colored, vaguely shaped humanoid with large arms growing from the back of her head.

Battle them is She from the .hack//G.U. OST

Retrieved from "https://sonicfanon.fandom.com/wiki/Kia_the_Symbios?oldid=16520"
Community content is available under CC-BY-SA unless otherwise noted.