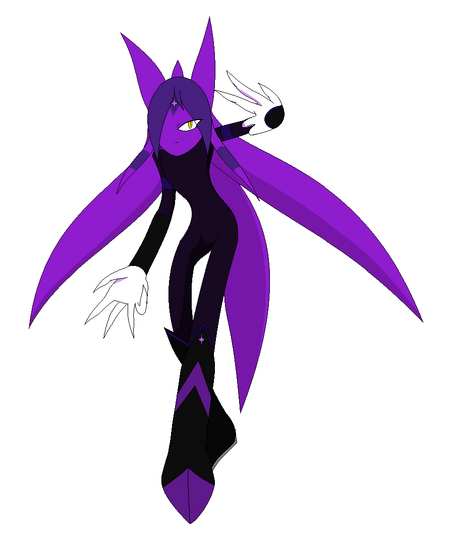 Kia the Protean is a mysterious shapeshifting creature with a strong sense of value in freedom. After reawakening a thought-to-be deceased Kai, she has partnered herself with him to help him regain his life.

Kia possesses a purple texture all around her body, a single golden eye with a violet texture on her eyelashes and matching fringe that covers half of her face along with a cross-shaped crystal on her forehead. She has a trio of horns sprouting from the back of her head; two larger ones on either side of her head and a much smaller one at the middle. These horns trail behind her into large tendrils with two smaller ones framing her face. Most of her physical appearance is concealed from the neck up by a dark body suit, long braces that end in clawed gloves and boots with light purple accents

Kia is a rather charitable person with a kind heart and compassion to help those in need. She has a rather dry wit and a sharp tongue though, and come off as a bit rude with snarky remarks, but means well. There are very few things she cherishes more than the concept of freedom, being bound to nothing other one's own will and gets particularly uppity to see any form of restriction on that freedom..

While a formidable opponent, Kia is not as quick as some other characters and a powerful enough hit will knock her out. She is also susceptible to solvents as well as an aversion to cold environments and ice-based attacks

Kia the Protean's design was originally an entirely different character altogether, albeit with the same powers. However, unable to come up with a satisfactory color scheme, I decided to instead apply Kia's own color palette to it, and there it is. I've always wanted an actual shapeshifter who could turn into other people and mimic them to a tee.

N/A This article is a stub.

Retrieved from "https://sonicfanon.fandom.com/wiki/Kia_the_Protean?oldid=1799749"
Community content is available under CC-BY-SA unless otherwise noted.