Kha is a Pademelon. He likes eating melons and looking at melons. He is from TRANSAEXUAL TRANSKYVANIA. he is the best character on the wiki 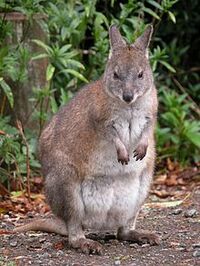 Kha looks like a hyperealistic pademelon. He has brown fur and a cream belly. He also has relatively small ears and beady eyes. He is fat.

Even though Kha can only say melon, he has a personality. Kha likes angering people. He is an internet troll. He is amused by hurting people's feelings or offending someone. He likes the word "melon".

He has all of the powers.

He has a very specific set of skills, skills he has acquired over a very long career. Skills that make him a nightmare for people like you.

He has all of the abilities.

Anyone named melon. Or kha.

grace and anyone named grace.

Retrieved from "https://sonicfanon.fandom.com/wiki/Kha_the_Pademelon?oldid=1861375"
Community content is available under CC-BY-SA unless otherwise noted.