I see the problem here. It seems like a few cables were sliced open. I don't know how it happened, but I know how to fix it. All I need is at least a week and 80 dollars. It's an easy thing to fix for me, I just need some time and I'll get right to work. 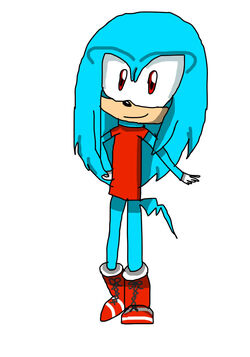 Kester the Echidna is a fan character created by Darkest Shadow. He one of The Eight Mates, and a brilliant inventor, able to build pretty much anything and everything!

Kester at first was considered to be the trash found in Darkest Shadow's characters. A hot unorganized mess, he was heavily inspired by Dill Pickles from "The Rugrats" spinoff, "All Grown Up". He was seen as this weird child with no friends, who happened to be gifted in robotics.

However, later on, the creator traded in his weirdness for high levels of intelligence.

Kester is definetly kind, a bit of a psycho and strange. His love of collecting things and unusual science experiments show it. This makes him sound a little geeky. He is also pretty unpopular.

Kester also is very in to magic. He learned a few card tricks and simple tricks. He also thinks that his ability to fly isn't a trick but it is that he "hasn't accepted the Laws of Gravity".

Standing at 3'6, weighing about 70 lbs., Kester is an echidna with light blue fur. He has spines that go down to his back, leaving two in the front. His skin underneath is peach; the color of his muzzle. He has light blue fur over his arms and tummy. Like most echidna's you can't see his ears. His eyes are connected with red irises. His tail is in a zigzag shape like most echidnas.

Currently, Kester wears just a regular red short sleeve shirt with a circular collar. The odd thing about his attire is him wearing no pants. He also wears white gloves with sock-lick cuffs. He wears white socks and red shoes with white lines at the middle of the foot and grey laces. However, the most unoticable thing about his clothing is that he is wearing a highly transparent layer of a body suit that protects him from all types of kinetics and kinetic based attacks.

Kester's main talent is his crazy inventions. He has made a few nifty devices over time, and they come in handy when someone needs them. While some of them are useful, some of them..... not so much. He can use his knowledge of this to create machines and inventions beyond belief and it impresses some of his peers. When he puts his mind to it, it isn't very hard for Kester to work with a few tools to create something amazing.

Some of his inventions involve:

Kester is shown to be gifted with high levels of intelligence. He has taken the test, and is revealed to have a strangely high IQ of 236. He shows his intelligence mainly though school with the first being maintaining a 5.9 GPA in his school. He was eligible to take a junior level Physics class in freshman year, and that went up to the current thought of Kester being able to graduate a year early (this year) with a full scholarship to universities with acceptance rates as low as 8.7%.

In ways outside of school, Kester also knows how to hack computers. He learned how to do this from his roommate at the MCA. He has made an app on his computer and phone that allows him to type words in the terminal for confusing and geeky commands that the average person doesn't understand.

Kester although he's just beginning, is a magician. He knows a few simple card tricks. He's not that good at them though. Also, he can make things disappear and reappear. His skills though are not that easy, but they aren't hard either.

Attack: 2- Though his machines are powerful, Kester is physically frail when it comes to physical attacking his opponents.

Defense: 6- Despite being a weak attacker, his defense is much better.

Evasion: 8.5- Kester is pretty much used to running away from attacks.

Skill: 10- Always equipped and knowledgeable about his weaponry and items.

Intelligence: 10- Kester is extremely intelligent, in school and on the battlefield.

Retrieved from "https://sonicfanon.fandom.com/wiki/Kester_the_Echidna?oldid=1742005"
Community content is available under CC-BY-SA unless otherwise noted.