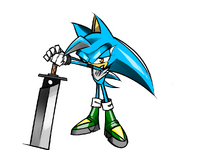 Keo is cyan with white highlights head, and his one large spike. He has orange eyes, and wears large green boots with yellow triangle patterns. He wears white and black gloves with a dark brown wristband on his arm.

Keo is very quiet, calm, and mature. He spends his time training in G.U.N with no interruptions what so ever. He becomes laid back when he isn't in a mission.

Keo can also be completely stern when in a mission from G.U.N. He will have an intimidating look on his face and never holds back any punches or kicks. He will unleash his full potential in life-threatening missions to do his part of G.U.N.

Keo was born on a rainy day with no parents. Keo was a bit lonely but learns to get used to it. He walks into an orphanage lived there until he was ten. When he was walking in the deep woods looking for food, he got struck by a giant lightning bolt. He was fine, however, he acquired the powers of lightning itself. He was not shocked by amazed by this and uses it with great responsibility.

Keo was so busy protecting people with his powers that, he wants to use his full extent of his abilities. That is until a portal sucked Keo through space and into the human world. Keo was then walking on the streets and is found by G.U.N Troops and takes him in. Keo passed all the qualifications and joined G.U.N, he passed all of his training as a recruit  and is now fully part of G.U.N and soon later become an agent of the military.

Just like other Electrokinetics, Keo can be able to infuse his electricity to his sword to deal high damage into his opponent and possibly into any object. He can also use electricity to obtain different sorts of electric attacks. Such creating large ball of electricity and expanding with size. He creates small lightning balls to stun and paralyze his opponents for a short for long amount of time.

Keo can use his electricity to move and think in high speed. He can enhances his reflexes due to his increased brain activity. Keo can channel his energy to burst of speed and can almost catch up with Sonic the Hedgehog himself, almost moving at the speed of sound.

Keo has the power to perceive at a very fast rate. His mind and senses at such speeds that time slows down around him. He can be able to use this power to make precise strikes with his weapon.

Keo has one longsword, with a dark brown hilt with a silver blade. When it charges, the blade turns light cyan. It engulfs into blue lightning if it reaches full power.

Keo has his primary weapon, which is large sword given to him by G.U.N and serves to manifest his own power. The sword is able to cut through any material and absorbs the electricity from other objects to heal the strength of it's user, Keo. Keo uses his electricity to engulf the blade in lightning to deal high damage and stuns his opponents at the same time, it can also release lightning beams.

Add a photo to this gallery
Retrieved from "https://sonicfanon.fandom.com/wiki/Keo_the_Hedgehog?oldid=1853183"
Community content is available under CC-BY-SA unless otherwise noted.