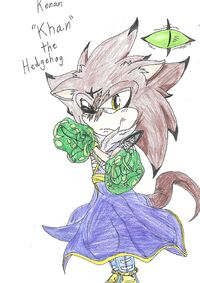 Khan is a knowledgeable, serious, and loyal individual. Raised on the values of hard work, honesty, and courage, he is a man who prides himself on strength and honor; having little tolerance for cowardice and treachery. Khan can often be found training in solitude, whether its through meditation or physical workout. He likes eating dumplings and various fruits, particularly apples and oranges. As someone who survived their onslaught, he has not only developed a hatred for them, but has since grown powerful enough to slay these apparitions of evil.

Khan is a powerful and ancient warrior who values loyalty and honor, he is very stern and having lived for thousands of years he is quite knowledgeable as well. One day, when he was still a small boy, his village came under assault by an invincible creature from another world; leaving Khan the sole survivor. One of many mistakes the monster made that night. Swearing vengeance on this assailant, Khan would dedicate the rest of his life to seeing it dead at his feet. Ironically though, this quest of hatred only mellowed him out as he learned various martial arts, and magic; but though his anger dwindled over the years, it never truly died. Now a master of martial arts and magic, Khan went on to combat the leader of this legion along with his brother in arms; having sealed him away, he'd spend nearly 20,000 years fighting against the rest of the Demon Legion. With immeasurable strength and speed, he is a force to be reckoned with.

Through years of physical training, with minor mystical enhancements, Khan's body has become very powerful; he can overpower demons who have power equal to multiple Chaos Emeralds and who can easily surpass the speed of light. Khan possesses high levels of otherworldly strength. He can lift mountains, shatter meteors, and regularly overpowers Demon Giants; demons who possess immeasurable strength as their power is equal to that of 5 to 6 Chaos Emeralds. He is capable of moving well beyond the speed of light as he can casually keep pace with Demon Troopers. Demons who can move at warp speeds. Khan is tough enough to tank attacks from beings with power equal to that of the Chaos Emeralds for long periods of time. Demon Chiefs, who are among the top tier of demons, offer him little challenge; if that.

Though he is extremely powerful, he is not unbeatable. While he no longer ages, he can still be killed with enough damage or by taking a fatal hit. Magic can be countered by other sorcerers or even magic immunity/negation. He can only keep his third eye open for a few minutes, but if he keeps it open for too long it will start to drain his stamina.

Retrieved from "https://sonicfanon.fandom.com/wiki/Kenan_the_Hedgehog?oldid=1872407"
Community content is available under CC-BY-SA unless otherwise noted.