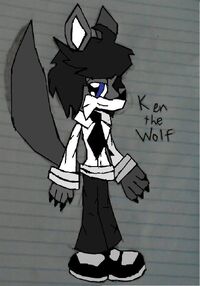 Ken is a Mobian Gray Wolf with black hair and dark blue eyes.He wears a a white buttoned dress shirt with a black tie,dark grey dress pants,and black dress shoes.He'll were glasses in order to see small print or things up close.

Ken is flirty,gentle,and kind wolf.Ken enjoys flirting with all kinds of woman,though if he ever got a girlfriend he would be completely loyal to her.Ken can be some of a joker to and has a great sense of humor,but he hates when jokes go to far.He is kind and gentle,but possibly only to people he is really close to,other than that he's neutral.

Ken was born in Liberty City to two Gray Wolves.His early life was pretty normal,he grew up in a small family with no siblings.His mother taught him how to garden at a young age.Eventually he would get used to it and loved gardening.He grew up wanting to learn more about plants.

He eventually went to Kindergarten and often asked the teachers if they had books on plants.He spend most time to hiself and read the books.He was very anti-social and he liked being left alone to learn.He got good grades throughout his Elementary years.

Soon he would go to Middle School and things there would become a little testy.Some of the kids at the started to pick on Ken for not being social like the others.He tried to be social,but it wasn't as interesting to him as researching flowers,vegetables,and trees.During the end of Middle School,he took an interest in girls and began to flirt with them.

High School would come and the bullying would get worse.The girls he flirted with would step all over him and the jocks would beat him up.It grew worse within the passing years.He decided to run away from it all and dropped out of High School.He knew his parents would be angry,so he ran away from home,too.

Retrieved from "https://sonicfanon.fandom.com/wiki/Ken_the_Wolf?oldid=1546448"
Community content is available under CC-BY-SA unless otherwise noted.