Start a Wiki
This is an article about Keith the Echidna, a character created by Spyken (Emidikun on DeviantArt) on August 7, 2012. 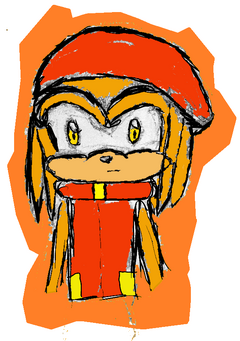 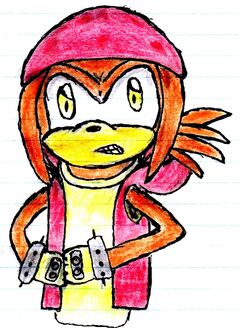 Keith is an Echidna from the future. His first appearance was alongside his teammates Spikes and Max, trying to get rid of Sonic in the past.

Keith is an orange echidna with yellow eyes and yellow gloves with spikes. The gloves belonged to his late brother.

Two years after trying to kill Sonic, he started wearing a sleeveless shirt and shorts with a red and yellow color scheme. He also wears a red hat.

When he was 13 and went after Sonic, he wore a loose and tattered white sleaveless shirt and red shorts. He also wore simple shoes.

Ten years later he got a bit taller. He shifted to a sleeveless red hoodie and yellow shirt, with darker red shorts and now wears a red bandana around his head. He also started wearing his dreadlocks in a ponytail wih two framing his face, making him resemble his brother more.

Before the death of his parents, he was an innocent boy, doing whatever he was told and always had a smile on his face.

After the accident, he only trusted his brother and lost his smile. He always seems angry and always does what he wants. He only listened to his brother Jake and currently to Spikes. Having grown up in the streets, he learned to be tough. He swears a lot and acts rude. This causes him to argue with Max who is well mannered.

This is fake however, since he still has an emotional and sensitive side, but he hides it from everyone.

Keith's parents died in a car accident when he was 5. His brother Jake, 14 at the time, vowed to take care of him since that day. Jake trained hard to protect his brother and was soon a feared combatant in his neighbourhood. They lived on the streets, stealing what they needed to survive. 3 years later, they were ambushed by armed individuals. Jake died trying to protect his brother. Before dying, he gave his little brother his gloves, saying they were "special" and died. After that, Keith was abducted in tears. The reason for his abduction was to him being the perfect subject for the power type of Project Sonic Reborn. An organisation detached from G.U.N. wanted to use them as super soldiers and take over the world.

The experiment went very well, until an unexpected failure of the core reactor which seemingly poisoned him and the two others. As the base was falling apart, their tubes broke and they came out of them, alive. He befriended his inmates and they proceeded to escape the base. When they got out, nothing of the base remained, leading Spikes to think that his family was dead. Enraged at the loss of his family and discovered that the "poisoning" had only enchanced their abilities, he proposed to make a team to seek revenge. Having lost his brother due to them, the young echidna didn't hesitate in agreeing. They called it Team Atom . They would spend 5 years hunting down every member of the organisation and after finally finding and defeating the leader, he revealed them that Spikes' family was still alive.

Following this, they were confronted by an unknown scientist (who was Eggman Nega in disguise) that persuaded them that killing Sonic in the past was the only thing they could do to regain his their lost life and family. Using a machine of the same scientist, they travelled to the past and went to search Sonic. They first found Amy and befriended her, especially Spikes, since she remembered his his lost sister. After finding Sonic, Spikes ordered Max and Keith to distract Tails and Knuckles. Keith didn't need to hear this a second time. He charged at Knuckles and the two of them had a terrible battle. Knuckles the upperhand, being stronger and able to dig underground, until Keith activated his Atomic strength. Being totally unprepared for this (digging underground wasn't an option anymore due to Keith's Atomic quakes) Knuckles was defeated. Meanwhile, Spikes had engaged a fierce fight with Sonic. Sonic was not prepared for the Atomic powers of his foe and transformed into Super Sonic, being more than a match for Spikes. Before that Spikes could lose however, he and Max shared their powers with Spikes. As Atomic Spikes and Super Sonic continued the fight, Amy intervened before Spikes could lend a final blow.

She told them that Eggman had made another giant machine which suceeded in defeating the Chaotix and...Shadow. Sonic was not really concerned until he heard that Shadow had also been defeated. Spikes realised that this was more important than killing Sonic at the moment, so he and his team agreed to help. After a long battle, Max realised that the robot had futuristic parts. At the same moment, Eggman Nega revealed himsself (still in disguise) and announced that he was the mastermind behind those events. Enraged to have been used, Spikes lanuched a Atomic Tornado at the scientist, only to have the machine power up into a large robot. Sonic then offered him the power of the Chaos Emeralds and they both went Super. The two of them bested the robot and destroyed it. The cockpit however, was empty. At the end Team Sonic shook hands with Team Atom and they returned to the future. Upon their return, Spikes disbanded the team.

Two years passed and during this time Eggman Nega revealed himself. Every plan of his was stopped by the Peace Enforcers , a group of heroes created by Max.

During this time, Keith wandered the world whilst honing his fighting skills. He eventually started to participate in underground boxing tournaments in order to gain some money, where he became the reigning champion. After seeing a live broadcast of a battle of the Peace Enforcers, Keith went to help his former teammates. He arrived on the scene just in time to seemingly "save" Spikes from an attack in the back. Spikes commented that he was slow, with Keith replying that he doesn't have superspeed. This was the rebirth of Team Atom .

When not saving the world, they search for Spikes' family. When Spikes goes to the past to visit Amy and challenge Sonic, Keith sometimes escorts him only to see Knuckles.

Superstrength: Keith's power was most likely the normal strength for someone of his build and age. After the expirement, he became superstrong but still weaker than Knuckles, due to not being a mutant like him.

Atomic strength: Due to the instability of the experiment, he was gifted the power he calls "Atomic strength". His hands are then covered in an orange "plasma" aura.

"Super" Keith: He doesn't have a transformation of his own, but when Spikes goes super, he can share the power with his teammates. This causes his fur to lighten, gaining the same ruby red eyes and having the same golden aura.

1 of 15
Add photo
Retrieved from "https://sonicfanon.fandom.com/wiki/Keith_the_Echidna?oldid=1825157"
Community content is available under CC-BY-SA unless otherwise noted.