"So this is Fauna Metropolis... I like it!"
—Kazou 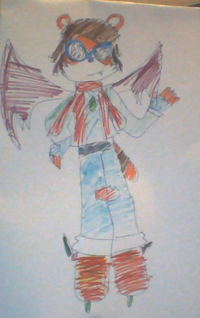 Kazou The Colugo is a 13-year old Brown and Orange Colugo (flying lemur) , and is possibly the first colugo character on the wiki.

Kazou has orange fur with mid-length brown hair, and has a orange and brown tail. He wears a red scarf and a vest, and under the vest he has a blue shirt with a green gemstone decal on it. He has brownish-purple wings, and he wears red goggles that obscure his eyes. He has a dark grey belt with blue pants with tears below the knees, and he has red shoes with retractable wheels which are green, and he has attachments shaped like wings on his shoes.

Kazou is naive, and a little bit cocky, but he has a heart as pure as gold and cares deeply for his friends. He is always on guard and ready to fight, and/or protect. He enjoys painting and composing, and he likes electronic, techno, trance, hardcore, happy hardcore, hi-tempo jazz, and classical music.

When Kazou was young, he had always aspired to be a freedom fighter or his own hero, and looked up to several people when he was very young. One day, when he was 9, a fire broke out in his house, but Kazou managed to put it out with his sorcery, and has since then been fond of any type of magic.

Magic - Can use elemental sorcery, amongst other things.

Bomb Summoning - can summon various explosives at will.

Strength - Can hold up to 200 Lbs. with ease and by himself, and can punch through concrete up to 2.45 feet thick without injuries.

Flight - Thanks to his wings, he is flight-capable. He flies like Rouge, but his ascent is sharper and he can accelerate faster.

Gliding - Can glide. he doesn't travel as fast as Knuckles when gliding, but his descent-rate is 65% slower.

Hovering - Can hover at a flat level for about ten minutes.

Climbing - Can climb around on things with ease.

Superb Swimming - He can use his wings to cut through the water and swim faster.

Sandstorms and Sand flying at him in general

The Original sketch. (sorry it's not the best, any submission that's any amount better than this will be nice)
Add a photo to this gallery
Retrieved from "https://sonicfanon.fandom.com/wiki/Kazou_The_Colugo?oldid=1813256"
Community content is available under CC-BY-SA unless otherwise noted.