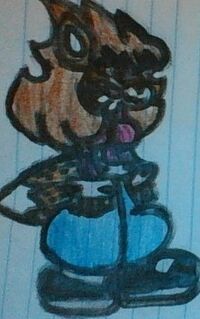 The epitome of the Stepford Smiler, Kaytlin always acts nice and kind. Enough for you to believe she really is sweet. But, likewise, it's all a façade. Kaytlin is a troubled girl who has a hard time making friends and is generally scared of people. Though she's loyal to her friends and lover, she feels guilty because she believes she's leading them on.

On the inside, she's more shy than she is outgoing. Only to Mobians and Overlanders, however, she gets along surprisingly well with animals. It's shown mainly through her pet, Rowdy, whom she cares about deeply. But not more than her lover, Kenzo.

Kaytlin is a run away. She ran away from her family when she was young and she's been on the run ever since then. She even stole a horse from a farm close to her home to get even farther away.

This would lead Kaytlin into Liberty City, an abnormal city laced with criminals. Even a majority of her friends being said criminals. One day, on the run from the cops, Kaytlin was chased up building roofs until she came to one she and the horse couldn't quite make. And she in horse fell into an alley way, where Kenzo was being attacked by thugs. The horse fell on the thugs, knocking them out. Kenzo, confused as hell, tried to leave, but first thanked the small fox for saving his life. Kaytlin followed the wolf in hopes he would take her to his home, where she could hide. Weirdly enough she followed him, until they got to a warehouse and a small makeshift bed. At this time, Kaytlin realized he didn't have a home either.

Upon seeing Kaytlin had followed him, Kenzo almost attacked the fox. He decided not to, as she had saved his life earlier that day, and instead questioned why Kaytlin followed him. Kaytlin explained she was a run away, who was trying to get away from the police. Kenzo was slightly frustrated he had to share his space with the fox girl, but went along with it.

The next morning they were woken up by a loud noise, only to find a Mobian Ram fixing the warehouse. He was so caught up in his work, he completely ignored Ken and Kaytlin being there. Kaytlin suggested they spoke to the ram, to which Kenzo already walked up to the ram and almost hit him over the head. Kenzo immediately stopped after the ram turned around. Kaytlin ran up to the ram and asked if he had a home. The ram introduced himself as Travels and told them he didn't have a home. It was at this point, Kaytlin made a goal for herself to find herself and the boys a new home.

Whilst finding a new home, Kaytlin and the boys stumbled upon a little Mobian Horned Toad girl who tried to con the three out of any of their money. Upon finding out none of the three had any money, the little lizard girl attempted to run away, before she was stopped by the three. Kenzo, hoping there was some form of reward for catching the young girl, grabbed her by her tail and almost went to the police to get money out of her. Kaytlin stop Kenzo promptly, telling him that not only would it be wrong to turn in a young girl for money, but that Kenzo and Kaytlin might be returned to their parents if they did. Kenzo didn't want to let the young girl go after what she did to them, so Kaytlin suggested they let the young girl join them in their quest. Kenzo was furious at the idea, but let it slide, saying it would help pay off what she did. Kaytlin told the young girl that they could join them in their quest of finding a new home. The young girl agreed and introduced herself as Flores.

A couple of days after adverting the fiasco, they dug them selves deeper into more trouble with criminals. This time with two Mobian rabbits, known as the Bunny Twins. They cornered Kenzo into giving them money or a place to stay, the same mistake Flores had made days earlier. The girls also found out Kenzo didn't have any money. The younger sibling slammed a metal bat into the back of Kenzo's head, making him unconscious. The elder sibling yelled at the younger for doing this. Not willing to leave the tall wolf there for doing nothing wrong, the elder forced the younger to find any of Kenzo's family or friends. Kaytlin, Travels, and Flores eventually found Kenzo with the two. Kaytlin viciously attacked the two girls until Kenzo woke up. Kenzo, despite having been attacked by one of the rabbits earlier, told Kaytlin to stop. Kaytlin eventually did, and the girls gave out their names, Lily, the younger, and Chrissy, the elder. The explained they were only criminals because they were abandoned by their parents. Kaytlin, who had forgiven them, asked the girls to join them. The girls had excepted.

A cowardly, prideful Mobian Gray Wolf Kaytlin seems to be in love with. At first, Ken was annoyed with Kaytlin coming around, but he eventually sweetened up to her, as no other girl had treated him this way. The two have a lot of chemistry, as the two don't seem to like other people and find them annoying, as well as Kenzo and Kaytlin being runaways and possibly stepford smilers.

Retrieved from "https://sonicfanon.fandom.com/wiki/Kaytlin_the_Fox?oldid=1602486"
Community content is available under CC-BY-SA unless otherwise noted.