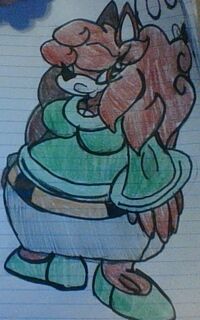 Kayt is a chestnut furred cat with hazel eyes, freckles, and long eyelashes. She appears to have long flowing, curly hair all over her body and is really chubby/ slightly overweight. She wears long sleeved forest green shirt that's too big for her, so she has to roll up the sleeves, neck, and bottom for it to fit. She also wears a brown belt with a brass buckle in the middle of it, gray dress pants, and forest green shoes that match her shirt.

Kayt's personality is undefined. She can be sweet sometimes and be a jerk at others. It all depends on the person she talking to, however. She's mostly sarcastic or ill attitude with her family or Vivian. Though, if she makes any other rivals or enemies, she'll definitely find the best ways to make fun of them. Towards people she likes, she's extremely sweet, especially if said person is her lover. Other than that, she just neutral towards strangers and acquaintances. Not only is the cat sweet to her lover and friends, but she's also extremely loyal to them, too.

Kayt could also be described as neurotic and passive-aggressive. She constantly worries about stuff, mainly her pet Hermit Crab, Armstrong, and her siblings. She also worries if everything is in order, especially her emotional state at her home. Though as of recent, she doesn't seem to care that much about what they do, seeing as she'll leave them in the next few years anyway. When she's passive - aggressive, she tends to blow up. Big Time. And considering what her adopted family does, it's warranted. She always bottles her emotions up until she blows up.

Kayt was pretty strong from the beginning, since her real mother and father were pretty strong individuals. She's gotten a lot stronger over the years, do to being in the extermination business and the constant carrying of heavy equipment and objects.

The only skill Kayt has that she learned through years of learning. Her IQ ledges on 123-124, almost making her a genius, but not quite yet. She's still trying to get to 130 to at least become a genius.

Kayt is pretty weak, only relying on Kenzo, her intelligence and strength to help, as well as some aid from the Glass Mill Ghosts. Usually, Kenzo and the Glass Mill Ghost aren't willing to fight or aren't to strong and Kayt's not that intelligent or strong either. She's weak Emotionally, compared to Mentally and Physically.

Kayt's adoptive mother. The two hate each other a lot and have different views. Kayt is forced to take care of Skittles' kids when she's in a bad mood or not at the house.

Kayt's adoptive father who's never in the picture. She hates him for his abandonment, but likes him better than her mother for his laid-back attitude, compared to her other adoptive guardians attitudes.

Kayt's adoptive grandfather. Kayt hates him the most, since he constantly harasses and fights with the rest of the family, especially Skittles. He also likes to hit and yell at the children, but fears Kayt.

Kayt's adoptive grandmother. Kayt dislikes her, but still remains friendly with her. She's the only other adult in the family Kay can tolerate.

Kayt's adoptive little sister. Kayt cares about M&M like she's her real sister. Whenever Skittles angry, Kayt keeps M&M and her brothers away from her. M&M thinks of Kayt as a big sister and gets along with her slightly.

Kayt's adoptive younger brother. He's slightly afraid of the older cat since she's new to the household. The two are still learning how to get along.

Kayt's adoptive younger brother and twin brother of Ike. Mike's the only one in the family who likes Kayt the most due to the fact that Mike will warm up to anyone who's willing to give him attention.

Kayt's adoptive younger brother and twin brother of Mike. He gets along a little well with Kayt, but doesn't trust her that much.

Ghosts of deceased children/teens who haunt the young cat's house. However, they're not evil or remotely scary, just normal people who happen to be dead/ghosts. Kayt seems to get along with each of the members.

A group of aristocratic chickens whom live by Kayt and her family. They often request help from Skittles and her children when they find vermin in or outside their house. Kayt likes all the members except Torch, since the two always fight.

An old man who happens to live near Kayt's family. He appears to be a friend of the family, despite constantly flirting with Skittles. He and Kayt seem to get along.

Another friend of the family. he's young, too, but only younger than Skittles. He babysits the children + Kayt when the adults are out of the house. He and Kayt seem to get along.

A thirty three year old woman Kayt hates with a passion. For unknown reasons. Weirdly enough, Kenzo hates her, too. She often harasses and/or pranks the poor woman when she gets the chance.

"Yup. Knew it." - Kayt self awareness that she would lose.

"Please Leave." - What Kayt says to people she doesn't like.

Retrieved from "https://sonicfanon.fandom.com/wiki/Kayt_the_Cat?oldid=1654919"
Community content is available under CC-BY-SA unless otherwise noted.