The author of Katie The Seedrian considers this page to be unfinished. As such, some sections may change.

Katie The Seedrian is the Emperor of Apismia. Her current goal is to connect all known universes with a series of portals, so anyone can inter-universally travel. 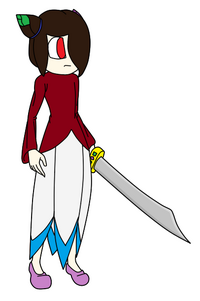 Katie doesn't talk much about her life. All that's known is that she was once a human, she didn't have the best relationship with her father, and that she believes her old universe to be the worst one she's been to. However, from her death onward is quite well known.

(I'll add the full version later. I had it all written out, but then the the page reloaded before I could save. So, have the abridged version)

Katie was tying to get to safety during a flood, when a motherly voice started talking to her and luring her towards the water. She couldn't control her body, and ended up drowning.

Next thing she knew, she's waking up in a strange corridor with a sign on the wall saying "Try to go back, or face judgement.". Katie, weirded out at this point, tried to head to the door labeled "Go back" but the voice took hold again and and forced her to open the door labeled "Judgement"

Behind the door was a black-colored courtroom with only a male, blond-haired Marten as a judge. After stepping forward, the marten quipped about how he doesn't get many people choosing judgement, before looking through what happened in Katie's life so far and telling her she's going to an afterlife called Jebalva.

Katie muttered something about about not having a choice, and the Marten proposed a game, guess his name and Katie gets to choose whatever afterlife she wants. The voice popped up again and tells Katie the Marten's name is Ramiro, which Katie repeats.

Turns out the voice was right, and Katie got to pick her afterlife. She went with the voice's pick of Apismia, the Ramiro opened a door to the afterlife.

At first, the door lead to pure white, but it soon faded to a white room with an elevator shaft, a table of weapons, a mirror, and a couch with a hedgehog sleeping on it.

Katie, Who wanted to be nice, sat on the floor and looked at the mirror. This was the first time that she saw herself as a seedrian, and due to all the weird things she had been through up until this point, Katie screamed out of frustration.

That scream woke up the person sleeping, who fell on the floor out of shock. Katie apologized profusely, but the hedgehog said it was ok. After that, the two of them had a long conversation, where Katie learned about the afterlife, as well as the person she was talking to: Nero the god of Apismia.

Soon, it was time for Katie to leave, and as a parting gift, Nero gave her two weapons from the weapons table, then Katie stepped out into Apismia proper.

The first thing Katie saw when leaving Nero's room was a town in the distance. It was the only thing around, so Katie decided to check it out. There, she bought her signature outfit, and got a tattoo on her left forearm.

She was about to head to the port to head to a different island, but she heard the voice from earlier coming from an alley. In self defense, Katie held up her sword and crept in. There, she met Aria, the goddess of knowledge, who quickly went over that Katie was supposed to be her sage, that they had a piece of her power within them since birth, and that's why she brought them here.

Almost immediately after that, Aria put a hand on Katie and awakened that power, giving Katie a spiting headache in the process. After that, Aria finished up by telling Katie she could summon her at any time by touching the sigil that was now on her body, and vanished. Leaving Katie alone with her headache.

After all of this, Katie's adventure truly started, and would go on to meet a bunch of people that she'd either help or befriend, learn to control her newly found powers and use her newly acquired weapons, as well as becoming the prophesied "true Emperor" of Apismia, which put her in a position of power she wasn't 100% cut out for.

Katie is seen as cold, quiet, and overconfident by the general population. Although she can usually back up what she says with either facts or her own power depending on the situation, she is usually portrayed as narcissistic, and has a sizable hatedom because of it.

It her friends however, she is Eccentric, and bit hyper, and is willing to help and hear you out with no judgement. She is also far more open towards her friends than anyone else, as they're the only ones she'll talk to about her insecurities about being a ruler, being good enough, and being strong enough.

The Society of Sages

Katie keeps her items in a small pocket dimension that all Apismian spirits have. This includes, Sage supplies such as candles, incense, a lighter, a phone, and a laptop. As well as her weapons.

She is only able to use these when carrying all the orbs. If not, these powers will be vastly less powerful or nonexistant.

Out of the two powers she has as a sage, she only uses her inherent omniscience. This is great in combat, as it makes her nigh untouchable, but it's detrimental to her social life, as no one understands what she's talking about. It's gotten to the point where Katie won't clarify what she means because she knows she'll be called a liar or a stalker.

For physical traits, her hair is dark brown and is just barely shoulder length in the front. In the back, it's neck length. Her skin is a pale reddish color, and her buds are purple (her left) and green (her right). Her eyes are a bright red and hidden under her jacket, on her left arm is a tattoo of a light blue flame.

Retrieved from "https://sonicfanon.fandom.com/wiki/Katie_The_Seedrian?oldid=1792921"
Community content is available under CC-BY-SA unless otherwise noted.