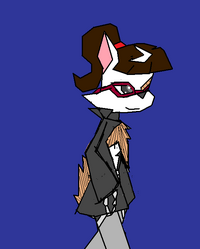 .Kate is an somewhat intellegent cat that tries to be heroic but fails because of what she does in certain situations.She often tries to manipulate and use other people but her morality gets the best of her and she can't do anything about.Despite the fact that she's an Anti-Villain,she's quite kind,caring,and loyal when you get to know her.Though she has been know to threaten to kill people.She loves exploration,knowledge,and adventure.Kate's relationship with her parents and relatives maybe why she acts like an Anti-Villain.

Kate is a white cat with light brown spots and dark brown hair which is up in a pony tail.She wears a dark grey collar and red glasses over her eyes.She also wears a shirt with an arrow that points to the word "Free Candy",a dark grey jacket over her shirt,grey pants,and black strapped boots.

She doesn't have much of a history.At the age of 13 she left her family to live a better life and moved to Liberty City.The first two years were rough because she couldn't find someone to take her in.Eventually Morgan E. Stallion found Kate sleeping in an alley in the rain and took Kate inside her house.Morgan  set up a tiny bed in her basement for Kate to sleep.Kate was suprised to wake up in a basement.Morgan greeted Kate when she woke up and eventually they got to know each other.Now Kate lives with Morgan in her basement and wanders around Liberty City.

Kate and Morgan treat each other like friends,but the two of them consider each other close aquantinces.Morgan usually has to calm down Kate when she gets violent and Morgan doesn't like it when Kate tries to introduce Morgan to other people.

Ken and Kate have a weird relationship.Kate tries to make advances toward Ken,but Ken doesn't feel like being with Kate that soon.Other than that,the two get along really well.

Alice the Unknown and Kate have an unsteady relationship.Alice comes around Kate just to torment her.Kate mostly ignores Alice.

Current character design for Kate
Add a photo to this gallery

Retrieved from "https://sonicfanon.fandom.com/wiki/Kate_the_Bobtailed_Cat?oldid=1602487"
Community content is available under CC-BY-SA unless otherwise noted.