"I'm not a warrior. I'm THE warrior!"
—Katana the Seedrian

Katana the Seedrian is a warrior and commander of Camelot City's army. She is a loyal servant of Queen Pruina, and the closest friend of Princess Sunset. After Queen Pruina was murdered by Kano's soldiers, she and Sunset joined Rio's team to protect Sunset at all cost. This, in turn, develops a relationship with Sunset she's unaware of. She is set to appear in Mac the Writer's story, Codename: Avalanche.

Being born a fighter, Katana is an "act first, think later" kind of character. She is brave, reckless, headstrong, and strong-willed warrior who will not hesitate to fight for what she values. She tends to take everything literally, even sarcasms and jokes, since she is so stern and focused.

She tends to be intimidating even to soldiers she's commanding. Her direction to them, even minor ones, always comes out so stern, direct, and loud. Basically, her speech to them would go like this scene from the movie Full Metal Jacket. Because of her stern and reckless nature, soldiers tend to follow her orders more out of fear than pride.

Despite these extremely tough personalities, she isn't one without a soft spot. Despite being unaware of her developing relationship with Princess Sunset, she does feel more softer than usual whenever she lays eyes on her. She also have a secret hobby of peacefully exploring forests around Earth, and she also secretly enjoys movies of the 1920s, 1930s and 1940s, with her favourite being Casablanca.

Unlike other Seedrians, she has no powers. She does have natural Seedrian powers to control natures, but compare to other Seedrians, hers is so weak that it's obsolete. Instead, because of her lack of powers, she's more of a close-range fighter, with her katana being her primary weapon.

The reason why her natural powers are so weak is because... well, she never used them in her life. She knows she had them, but she never knew how to properly use them. And since she got her sword from her father, which is capable of extending for a greater reach, she never bothered using her powers. Thus, it resulted her natural powers in being incredibly weak.

As stated, she has no powers, and her natural Seedrian powers are useless because of how weak it is. That means she's forced to fight up close, and without any sorts of projectiles, like guns or energy powers, she gets injured more easily than the other fighters and warriors. Because she also takes everything literally, she can also be easily fooled by her enemies to believing their lies, that is if she does't know them too well. If she knows their intentions, she would be able to tell their lies. But if not, then she can easily be tricked and manipulated.

Because of her reckless nature, she believes that fear is nothing more than the enemies' tactics; this is both an advantage and a serious disadvantage for her. Because of that belief, she isn't afraid of helping anyone who's about to be affected by said danger. She's also capable of convincing her allies to help her fight the enemies, thus helping them out of fear. However, this renders her oblivious to dangers that exceeds her combatant skills. She never thinks twice about her safety, and always stands up even after breaking a few bones of her own. This mentality is a serious health-issue for her, as she can endanger herself very easily without being aware of that.

Katana was born in Spagonia when her parents went there for a vacation. Because she ended up being born earlier than her parents expected, her mother died from Maternal death after giving birth to Katana, being unprepared for an early birth. Since then, her father named Gladius wanted to train her to become a soldier of Camelot City, for the sake of being able to fend for herself and not have to heavily rely on him. Seeing how her mother died and Gladius can't take care of everything for her because of how he's confined to a wheelchair, it's easy to see why he wanted her to become a warrior.

At the age of 14, she signed up as a soldier for Camelot Army, the youngest someone had become a soldier in Camelot City. It was there she also met with the Princess of Camelot City Sunset, who they became friends pretty quickly. Being a part of Camelot Army's swordsmen with her glowing sword, Katana quickly gained a reputation as Camelot City's most lethal and respected soldier.

That, alongside her close friendship with Princess Sunset, gained the attention of the monarch, led by Queen Pruina. When Katana was 17, the Queen gave her a test of leadership by having her go to the Tarantula Tower near Venom Crater, where she and a group of soldiers she would lead would go in and save a group of recent hostages from the clutches of Kano's soldiers. She did that, and with her leadership, bravery and support from her soldiers, she successfully saved the hostages from Tarantula Tower. Thanks to that, she was granted the title of Commander of the Camelot Army, with her bravery and leadership giving the army more strength to use.

As the Commander of the Camelot Army

She serves as the commander of the Camelot Army. She led the soldiers in many wars against either the Mobians or the Shadowmen, and helped them in the battlefield. Originally a regular soldier, her relationship with Princess Sunset, alongside her impressive skill as a warrior and swordsman, was what got Queen Pruina to choose her as the commander. Even after Pruina's death, she still holds trait of a brave commander, and often assists Rio in leading the team during battles. There are also a few surviving soldiers of the Camelot Army that she still leads.

When she and her teammates defeated Kano, she later became an agent of G.U.N., like Rio. Being a higher ranking agent, she tends to lead other soldiers of G.U.N., and also holds the duty as a teacher for future G.U.N. soldiers and agents.

Her weapon, the katana, isn't just any kind of katana. The katana can glow to sky-blue and white when in the middle of a battle. It's not just for show: it allows the sword to extend when swung, giving it great reach for Katana. Not counting her grenades, it's her only means of distant attack, but despite being able to extend when swung, it only goes so far. It reaches around 6 feet long, which is about the length of a giraffe's neck.

Aside from her katana, she also has a few grenades as her only means of "projectiles". Ironically, she doesn't like using guns in battles, but doesn't mind carrying explosives (possibly because of her thrills in warfare).

Katana is voiced by Moira Kelly, who is best known for voicing Nala in The Lion King.

Another source of loose inspiration comes from the character Princess Leia Organa[2] (also known as General Leia Organa[3]) from Star Wars, in terms of leadership and stern personality. The two not only have some notable leadership to the organization they respectively lead, but they also have a strong, stern and focused personality that makes them role models for many characters. The katana's design is also inspired by the lightsabers from Star Wars, seeing that it's capable of glowing when used.

A soldier that Katana leads (drawn by Apricotthevixen) 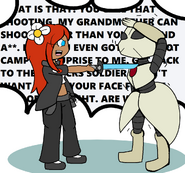 Retrieved from "https://sonicfanon.fandom.com/wiki/Katana_the_Seedrian?oldid=1693660"
Community content is available under CC-BY-SA unless otherwise noted.