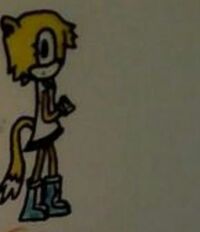 Kassidy Monroe (Kassidy The Cat) Is a Teenage Cat who lives in The Sonic the Hedgehog world, she is a High School Student Athlete with Hydro-kinetic powers, but tries to avoid using/going into heroic action at all cost to live a normal life. Kassidy is the main character in the fan series The Other Life. She is voiced by Emily Osment who also appeared in series like Hannah Montana as Lily Truscott and her role in Spy Kids 2.

Kassidy is a bit on the small side, usually wears a regular white dress, but her outfits vary from her normal days to her sports practices. Her hair is shorter, and usually wears blue shoes (Boots in general and running shoes/spikes)

Just like any other Teenager Kassidy Is completely relaxed and chill most of the time. She can be too laid back sometimes. In some cases Sonic couldn't believe someone was more relaxed than him, and Blaze is a polar opposite of Kassidy. Kassidy is very kindhearted, and easy to apologize too. She is also easy going, so sometimes she will talk about the easy way out. Kassidy doesn't get angry a lot she tries keeping her head up a lot of the time. or just laughs/brushes it off and tries again or goes through the rest of her day. The most important thing to know is Kassidy is not shy at all, and she will easily get caught up with making friends with everyone. She tries to hold herself and not make things weird but she would like to talk to everyone around her sometimes. She tries to help people through their fear of socialization and help others show how to relax in life in another life: A Pretty Relaxed and Sweet Life.

Kassidy's parents were old heroes who got together after their rough fights, but as Kassidy got older she got involved in normal activities before her parents could train her for a hero life. Her Mother Chelsea would then enroll her in a public school, but her father would try to pull her out from time to time. He finally gave up when she was 8 and would just accept the fact she wanted a normal life. By Age 13 Kassidy moved into her own place like most people did in their world. She still attends the same school as she did when she started. Currently Kassidy is now a Senior in high school and spending time with her family and friends making her last year memorable.

While her water powers are a part of her, and she will use them sometimes Kassidy sometimes forget she has powers from never using them. She tries to not make a big deal about it, but she will use them for fun sometime. When she can lend a hand she will as well, but she also can use them to help people like Sonic and his friends. She does get pulled out of school sometimes to help them for a little bit, but she will go right back to school. To Kassidy all her hydro powers took a backseat since she was growing up.

Kassidy's weaknesses come from her personality and not her powers. Mainly when helping Sonic and others if someone manipulates her she gets frustrated. She also isn't the best as taking things serious all the time.

Retrieved from "https://sonicfanon.fandom.com/wiki/Kassidy_The_Cat?oldid=1826282"
Community content is available under CC-BY-SA unless otherwise noted.