Start a Wiki
This is an article about Kara-Ne, a fan-character created by Chica Nunnally!

The author of Kara-Ne the Echidna considers this page to be unfinished. As such, some sections may change. 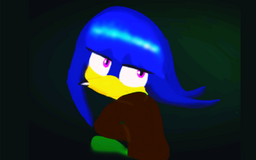 This character is currently owned by Julia Finitevus.

Kara-Ne is a female echidna born in the future of Light Mobius and a former Chaos Legionnaire.

Kara-Ne is a blue echidna with violet eyes and hair with much darker tips, as well as rather short dreadlocks. Her right arm is cybernetic.

In A Future Hope, she wore a teal tank top (which appeared to be green in most lighting) with brown pants, a black belt around her waist and black-and-white shoes. She wore a brown jacket, mainly to hide her cybernetic arm. To further hide the cybernetic limb, she wore a white glove.

In A Second Stand, Kara-Ne's outfit has changed. She now wears a mini-skirted teal dress (just like her tank top, it appears to be green in most lighting) with black trim at the neckline and hem, a black tulle petticoat underneath, a black ribbon sash around her waist, semi-transparent white leggings and black high-heeled shoes that she initially had trouble walking in.

To continue hiding her cybernetic arm, she wears a white glove and a black bolero jacket with the sleeves reaching to her wrists.

Kara-Ne is very secluded and antisocial, often being uncomfortable around other people. She has a mild temper, not getting angry very easily. Kara-Ne can also be described as an introvert, trying to stay away from situations that would involve socializing. Kara-Ne is also rather curious about kitsune culture.

Kara-Ne is interested in doing acrobatics, such as flips, etc.

Kara-Ne doesn't have any powers.

Kara-Ne's theme is Human by Of Monsters and Men.

Retrieved from "https://sonicfanon.fandom.com/wiki/Kara-Ne_the_Echidna?oldid=1780699"
Community content is available under CC-BY-SA unless otherwise noted.