Start a Wiki
This is an article about Kalos Shuriken, a character created by Horus-Trickster-King on 01/25/2015. 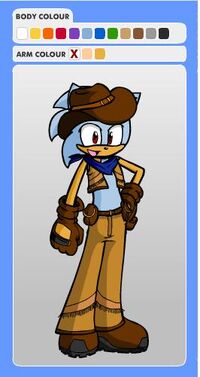 At the time he first is seen as a character in 'The Curse of the Frozen Heart', Kalos has light blue fur and crimson eyes.  His attire has changed from what is described in Taiyang's flashback to a tan open vest, a brown leather hat, a blue cloth bandanna around his neck, tan pants, a brown belt with a pouch that appears to contain money, and brown boots and gloves made out of leather.  His arms and muzzle have apparently become more tanned, although the insides of his ears do not suffer this.

However, at the time when Taiyang met him, Kalos wore black pants going down to his knees, crimson boots, and black cloth wrapped around his knuckles.  He also appears to have had paler arms and a paler muzzle.

Kalos is a very kindly man, and according to Taiyang Xiao Long, his partner in battle, he can also be very reckless and a huge risk taker.  He is also extremely patient, according to his children.  As an adventurer, Kalos also gets frustrated with people who get the lay of the land wrong.  Kalos also appears to like shiny things, but not to the degree that Bean the Dynamite Duck does.

Little is known about Kalos's history, except for the fact that at some point in his life, he met Taiyang.

Kalos possesses cryokineisis, or the ability to manipulate ice and snow.  This is his main offensive power, and as such, has passed down to his oldest child,Chaos Shuriken.  He can create large spikes of ice and freeze large areas.

Kalos also possesses weak electrokineisis, or control over electricity and lightning;  He can cause robots to short circuit after concentrating for a set amount of time, normally ten minutes or longer.

As a result of his work as a treasure hunter, Kalos has developed extremely quick reflexes.  These are first shown during his fight against Frozen Chaos and Ignis.  Their main use by him is to strike opponents with Kalos's Stick extremely quickly.

Kalos cannot resist making jokes about the fact that Taiyang is afraid of spiders.

Retrieved from "https://sonicfanon.fandom.com/wiki/Kalos_Shuriken?oldid=1568534"
Community content is available under CC-BY-SA unless otherwise noted.