If smart idiots say that darkness can’t defeat darkness itself, then tell me why I’m a dark one that sides with the light, fighting others who side with the darkness?

- Character is created by Skye. - 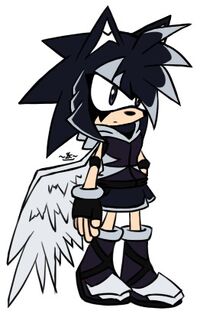 Keira wears a dark purple jacket vest with light blue triangular marks that form a ribcage-like pattern, having two on each side. The outline of her hoodie is silver, but the sweater’s extremely short sleeves are colored black. Inside, she wears a plain black sleeveless t-shirt. She also uses a dark blue skort, outlined with light blue. Her gloves are black, and reach till her knuckles. The bracelets that are attached to her gloves are silver. Finally, she uses a pair of dark blue boots with a silver ‘X’ mark on each boot, and a silver, extendable monoclaw on each boot.

Her winter attire has her sweater being long sleeved, and two light blue pom-poms dangling from a string, one on each side. She wears black leggings, and her boots have light blue straps, instead of ‘X’ marks.

On the outside, Keira is a quiet individual, usually keeping her true feelings and secrets to herself. She is also known to be loyal, responsible, observant, strong-willed and dutiful; not wanting to be seen as a failure. And when she knows that she’s failing/failed something important, Keira overworks herself. She will not sleep till she fixed what she did wrong, often tiring herself out in the process. She puts her team first; willing to take extreme risks for her teammates, leading her into near-death situations, and times where her teammates had to save her.

And she might seem like she has control of her emotions, but internally, Keira is conflicted by her past, and is still recovering from it. Whenever she’s alone, Keira ‘suffers alone’, in which she spends her time in her room, blaming herself because of her failures. Other than that, Keira has also been known to have a fiery temper. When Keira loses her composure, she’s known to be very stubborn, harsh, and aggressive. And at times, whether she’s calm or in rage mode, Keira can also be straightforward with what she thinks, especially if it comes to judging people, situations, or even what she thinks of her team’s plan. She usually doesn’t mean to be extremely harsh, as she’s just speaking what’s in her mind.

Keira can actually socialize pretty well, despite her hate for crowded areas (which are filled with talking, noisy people). She oddly finds crowded areas, and talking/singing in front of many people stressing, so she ends up avoiding these situations as frequently as possible. But in places where she ‘has’ to socialize, and is forced to speak up, or do something she hates, Keira will try and do it.

On the battlefield, she hates losing; especially when she isn’t able to show off her true potential. She isn’t afraid to fight at full power when she needs to, but she has to hold back most of the time. Keira also uses a lot of her imagination in battle, and also relies on her experience.

Umbra-Electrokinesis: This power gives her the ability to manipulate/control black lightning, which is the darker, and destructive side of the normal electrokinesis. Distance, mass, precision, and other stats of the attack depend upon of the knowledge, skill, and strength Keira has, and puts in.

Scale of Power: The amount of power Keira chooses to put in her umbra-electrokinetic attacks, and its effects. It has 5 levels of power.

1. Can paralyze an opponent, or make them faint, and is the weakest power scale of all.

2. Still is able to stun, but also has an 'almost never' chance of destroying the target.

3. Turns stuff into ashes when hit by this level of black lightning.

4. When the target is hit, signs of corruption might appear, but the corruption is slow.

5. Able to destroy and corrupt anything that crosses its path. Power and energy determines how destructive it is, and its strength to corrupt something.

Umbrakinesis: This is the power to control/manipulate darkness itself. Since her umbrakinesis is no longer patches of black that she adds to her electrokinesis, she is now able to use it, but it isn't as powerful as her father's. With umbrakinesis, she is able to travel using shadow sneak, and she has more attacks to use for her combos.

sing am arm cannon. Charges black lightning using her hands, that are balled up into a fist, before blasting a huge beam of destruction. How long it lasts, range, power, and aim is all up to Keira.

Moves Unlocked Only In Dark Form:

”Life will give us miracles in the darkest of hours, and create unexpected ways to show that we have to keep going. You have a brain. Think. I know it’s not easy, but there’s always a ray of sunshine in the midst of total darkness. You just have to find it.” - Keira

"It's normal to fall. That's how you gain experience to level up." - Keira

“Alright, I’m still bursting with energy for the next task.“ - B Rank.

Retrieved from "https://sonicfanon.fandom.com/wiki/Kalamaris?oldid=1870109"
Community content is available under CC-BY-SA unless otherwise noted.