Start a Wiki
This is an article about Kaitlynn Noyze, a character created by Rapidthehedgehog on 12/22/2014. 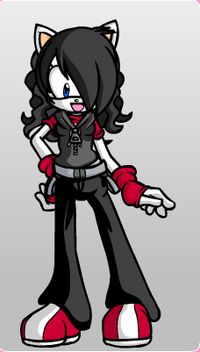 Kaitlynn, or Kate, is a white dog with black hair. She has blue eyes. Her muzzle is white with fur. Kate wears a black vest jacket with a red undershirt. She has a pair of black skinny jeans with a silver belt with a titanium steel belt buckle. Her shoes are red with white stripe down the middle, similar to Amy Rose's signature boots. Her gloves are red with the fingers exposed.

Kaitlynn is often described as creative. She can work with what she has to get something done. She is very spontaneous. Kaitlynn is often misinterpreted as a perfectionist. But really, she is just a very organized girl. Kaitlynn lives for the moment. She loves being thrilled, amused, and entertained. Kaitlynn is a very outgoing girl. Being a professional singer, she talks to a lot of parties and meets a lot of new people. Kaitlynn has no problem being paired up with new people because she is very people-oriented. Kaitlynn is a star on stage, full of self-confidence. At parties she seems to be very comfortable with herself. But once you meet her in person and not on tour or anything, she's an average girl wanting friendship, romance, and fun.

Born into a normal, average family, Kaitlynn had always been a singer. She sang when she was happy. She sang when she was sad. She sang when she was angry. Her father took notice of this and recorded her and put it online. Within days, she got positive reviews from people. At age 10, she went big. She sang at a Christmas party for her father's job. She attracted the attention of a record label. He gave her a contract and she signed with him. This is part one of her journey to stardom. Kaitlynn sang in minor venues; coffee shops, restaurants, and parties for kids her age. As soon as she turned 14, she blew up. Her father, also her manager, booked a gig at a club that many famous artists performed. She performed and the crowd loved her. This boosted her confidence and popularity. She then performed everywhere. Anything from clubs to parties to family events. Now, at 16, Kaitlynn is a well known singer. She resides in the north side of Stoneview City.

Kaitlynn can manipulate and generate music, an art form whose medium is sound and silence. Its common elements are pitch (which governs melody and harmony), rhythm (and its associated concepts tempo, meter, and articulation), dynamics, and the sonic qualities of timbre and texture.

Being a dog, Kaitlynn can go into her "detective mode". She will sniff deeply and try to track down something hidden or distant. Kaitlynn rarely uses this. She considers it to not be lady-like.

Kaitlynn had started singing at the age of 3, just reciting Christmas carols and songs. Her father realized that this is a natural talent she was gifted with. Kaitlynn continued to sing, eventually signing with a nig corporate company at the age of 14. Kaitlynn, now 16, continues to sing, tour around the world to perform, and produce albums.

As Kaitlynn continued her musical journey, she was approached by multiple movie producers and production companies to be a part of movies. She had the gift of acting as well. Kaitlynn has always been a comedian-type girl. Kaitlynn has been in 3 movies, 2 television shows, and dozens of commercials.

Kaitlynn can play a wide variety of instruments. Her primary instrument is her voice. As for playable instruments, her most used instrument is the guitar. This is a big part in her performances. She always sings to an acoustic song of her choice.

Kaitlynn plays the drums, but it isn't her favorite. She enjoys the sounds, but she thinks of herself playing the drums not to be lady-like. She started playing the drums at age 6. Kaitlynn doesn't have a problem using bongos however.

Kaitlynn has trouble dealing with criticism, hate, and insults. Criticism that results in negativity messes up her vibe and puts her in a bad mood, preventing her from being functional. Kaitlynn strongly dislikes "haters". Most of the time she can brush it off, but once a large number of people hate on her singing or acting she'll be upset. Kaitlynn cannot take insults at at. Bullied as a child, she couldn't handle the mean words said to her. So when she hears an insult that is really brutal, she'll burst into tears uncontrollably.

Kaitlynn also has a sensitivity to white noise, microphone/ and television static. This hurts her ears and renders her helpless..

Retrieved from "https://sonicfanon.fandom.com/wiki/Kaitlynn_Noyze?oldid=1605265"
Community content is available under CC-BY-SA unless otherwise noted.