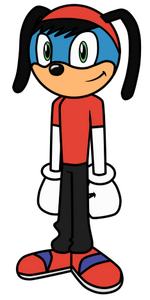 Kaiko the Dog is an original, Bleu de France, anthropomorphic White Labrador created by Pumpituppartyzone. He is 100 cm tall and weighs 35 kg. He currently isn't dating anybody, and his best friend is Skipper the Monkey. Kaiko is a treasure hunter.

Kaiko was created some time in 2004. He is loosely based off of a Toontown design. He was originally 12 years old, and followed the same age-change as Maxie Flippercorn until the present, where he was a year older. Kaiko used to be just as clumsy as Squeaky Mouse and Cliff McMuffin used to be. He always ended up having to look for people or look for things. He was great at treasure hunts, and loved Easter Egg hunts.

Kaiko is a very nice person. He tries his best never to be mean to people, and has incredible self control. He likes to sit home and watch television, and he is a bit lazy. However, he is an excellent treasure hunter. Kaiko doesn't stress out over things that much, but can take charge when he needs to. He tends to be more quiet than most people. However, he is popular at his school and has many friends.

Kaiko is a member of the "Flippercorn Allstars," and is a Speed Type character.

Cliff and Kaiko have been great friends since the 5th grade. They were in the same class, and their first project they did together. Afterward, they started to hang out a lot. They usually compete all the time and make up games out of everyday things.

Kaiko's first design on a computer 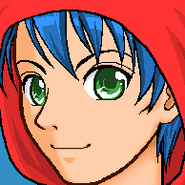 Kaiko in anime. Made at http://foxrichards.deviantart.com/art/FaceMaker-52755515

Kaiko and his friends as humans (base used)

"Let's get this show on the road!" - Before Race/Battle 2

"Sweetness! I won!" - After Winning Race/Battle 1

"I guess that was sorta suitable." - C Rank

"That was a failure." - After Losing Race/Battle 1

"Cool beans! Look at that!" - After hitting a home run

Retrieved from "https://sonicfanon.fandom.com/wiki/Kaiko_the_Dog?oldid=1853253"
Community content is available under CC-BY-SA unless otherwise noted.