Start a Wiki
This is an article about Kai The Fox, a character created by Mr.gameandfight on 12/18/2013. 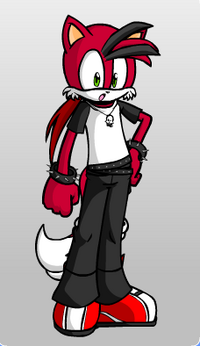 Kai The Fox was an anthropomorphic dark red fox that was created by Mr.gameandfight.

Kai was a cocky and egotistical person in most manner to people along with being a little serious when it comes to his adventures and journeys. Kai does fight yet he tries his best to stay out of harms way of anyone who challenges him to a fight. Kai is Taken to Amethust the Hedgehog.

will be up soon!

Similar to the character Kikime', Kai Mostly used agility and acrobatics despite not having any powers. However unlike Kikime', he could be able to use the air's pressure to make his attacks more powerful unlike a regular attack in which this creates a powerful projectile technique, in which the he started by kicking at very high speeds and strength, sending out a sharp compressed air blade that can slice objects and greatly damage a human body. However, it has been shown that almost any length of his legs at high velocities are also capable of this move.

As stated above, Kai uses Acrobatics and agilities as his main priorites in battles.

Despite his abilities, Kai  wass not that bright of a person with a 98 IQ and the physical age of 18 years old. Also within going out on adventures, Kai has an uncontrollable habit of getting lost along the way. He also has trouble not blushing at his girlfriend, Amethust the Hedgehog.

Kai was the only Character made by Mr.gameandfight to not have an English Actor

Retrieved from "https://sonicfanon.fandom.com/wiki/Kai_The_Fox?oldid=1658518"
Community content is available under CC-BY-SA unless otherwise noted.